By Sammoski (self media writer) | 2 years ago 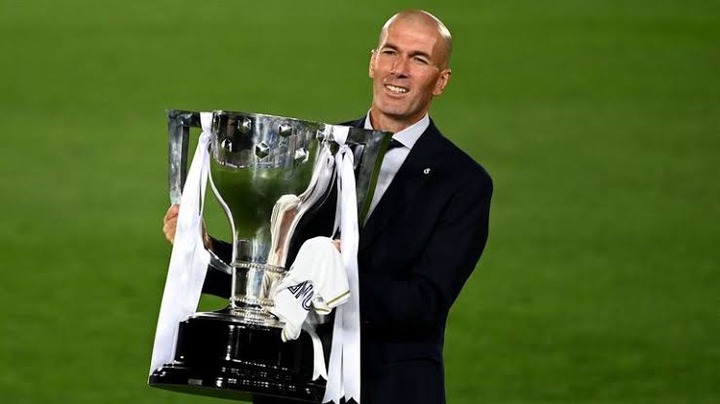 It was his 19th goal of the season and 6th since the start of Spanish League after the lockdown due to the corona virus pandemic, they concluded it up with more of the normal suspect involved, Ramos intercepted in front of Gerard Moreno and race forward before he was hardly tackled inside the eighteen yard box, which gave real Madrid a penalty chance, Benzema slotted it home after a retake.

Villarreal did come close with some attempts and Courtois making a couple of important saves, Asensio had a goal ruled out late but it hardly matter as Barcelonia had lost at Camp Nou and Real Madrid are the Champion, with 86 point while Barcelonia is 79 point 7 point adrift of Madrid. Zidane left Real Madrid 2018 having given the Club Tremendous success in European Football, that is unbelievable in modern era of football by being the first manager to retain the Champion League (European Cup) Three consecutive times in a roll which no manager in the world of football had ever done. (2016 against Atletico Madrid 5-3), (2017 against Juventus 4-1) and (2018 against Liverpool 3-1). Real Madrid is the most successful Club in European football, that is, being the European Champion Thirteen (13) time in the club/football history.

Real Madrid are still the most successful club in Laligas history with 34th League Trophies to their kite/name, but Barcelonia are catching up with 26 Laliga Titles, Barcelonia are behind real Madrid having 79 Point while after been defeated by Osasuna One goal to two (1-2), Real Madrid Clinched the trophy by beating fifth place Villarreal with one game to spare by wining the title on the 16th of July, (Thursday) 2019-2020 Season.

His focus for coming back is to bring back the home glory Real Madrid had, which was lost three year ago, meaning Real Madrid has not won the Laliga Title for three years now. Zinedine Zidane the head Coach of Real Madrid said after the celebration of the victory in his press conference with regards to captain (Sergio Ramos) our leader, he is the engine of the team, we know that individual player give something to the team but he is our captain, we have got four captains with Marcelo, Raphael (Varane) and Karim (Benzema) but it is true Sergio is our reference point for all of us for me as a manager, all Madrid fans feel well represented by Sergio in every sense of the word.

Content created and supplied by: Sammoski (via Opera News )