Giroud aims to win another FA Cup with chelsea

By ZoeMediaGroup (self media writer) | 1 year ago

Chelsea cemented their spot in the final of the Emirates FA Cup. The London club have won the competition a record of 7 times.

Chelsea won the semifinal tonight by trashing Manchester United three goals to one; courtesy goals from Mount, Giroud and an own goal from Maguire. The blues had lost their previous three matches against the Manchester club but tonight they showed a unique display at Wembley and dominating in both halves.

Giroud who was an important factor in the match has said that he would like to win another Emiirates FA Cup. 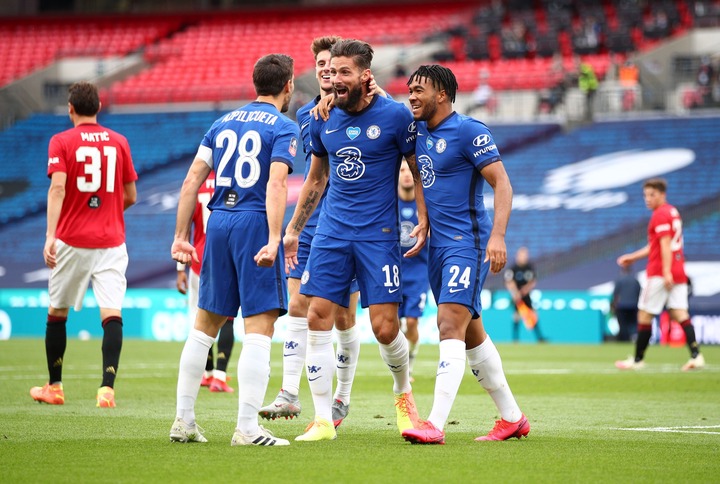 Former Arsenal striker Olivier Giroud has set his sights on upsetting former side Arsenal to win another FA Cup final.

Giroud has already won four FA Cups during his career in England, having won three with Arsenal before helping Chelsea to the trophy in his first season at Stamford Bridge.

The french striker who has been in great form since the return of football is now being motivated to lift the FA cup trophy with Chelsea.

In his interview he said:

"I said to the boys I would love to win another one, it would be my fifth FA Cup and we are in another final," he said.

"A big game against Arsenal which will be so special for me personally. We played very well and we want to finish in the top three in the Premier League now.

"We played three at the back, it's been a while since we did but we started very well. We had them under pressure and they didn't create much. We dominated the game."

Chelsea coach Frank Lampard heaped praises on Giroud for a great display. The French striker is an integral member of the squad now.

Lampard explained that "the team worked very hard in the last two days on countering Man United running in behind, and also on getting players into midfield to make tackles."

On goalscorer Giroud, Lampard says "the striker sets a great example to the younger players and today the other players did well playing around him. That is all from the boss here for now but check out the official club website and the 5th Stand app shortly for more."

Content created and supplied by: ZoeMediaGroup (via Opera News )