Boy Digging in Back Yard Uncovers a Valuable Treasure

By Olufhemyy (self media writer) | 2 years ago

Mike Iacovelli, who grew up in Worcester, England, was your average 10-year-old boy. He loved to go for hikes with friends and play around in his tiny hometown. Above everything else, he loved to dig for treasure in his backyard.

The town of Worcester, which had medieval roots, was located along the River Severn. In Mike's mind, a place as old as Worcester just had to be rife with treasures waiting to be discovered... right?

His instinct was correct! During one of Mike's digging adventures in his back yard, hidden deep beneath the rich and historic soil, he found what would become a precious family heirloom.

That day, Mike had been digging a bit deeper than usual. For whatever reason, he'd focused on a spot that he'd never explored before. He thought it was just going to be another bust, until he felt his trowel hit something...

He called for his parents, who were in the house at the time. This wasn't a rock or animal tooth; he realized that he might've found some real treasure, and he wanted his family to see it. 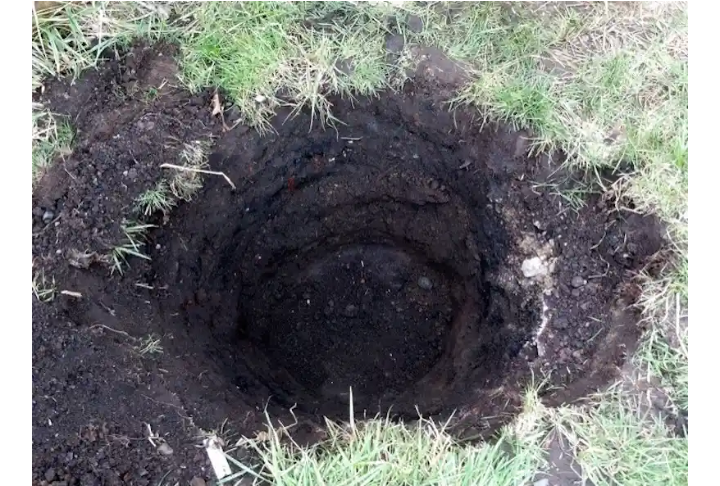 From the dirt, Mike carefully extracted what initially seemed to be a gold coin. It had some sort of engraving of a figure on one side and a message—"The Great War for Civilisation 1914-1919"—on the other, and there was a ring at the top where it could be attached to a chain or clip. He and his family quickly realized that it was not a coin at all.

Mike and his parents brought their discovery to an expert, who reported something fascinating. The "coin" he'd found was actually a medal of honor that was bestowed to soldiers who served in the armed forces during World War I!

Mike remembered feeling overwhelmed. "I recall the delight when I started to clean off the dirt and realized that this was not just another old coin for my collection," he said. In fact, he felt like this was just the beginning of a special mission—and he needed to keep the medal safe.

When he grew up, Mike left Worcester, eventually settling down with his wife and kids in Canada. He never forgot about the medal, however. "It has been treasured by me for many years with my intention of one day finding the rightful owners and family who it once belonged to," he vowed.

Mike couldn't stop thinking about how much he loved spending time in the back yard of his childhood home—and the precious discovery he made there. His own kids were far more interested in Facebook and smartphones than getting their hands dirty.

Still, Mike's kids knew all about the medal their father found as a child. When he mentioned how he worried about its rightful owner, they encouraged him to take to Facebook to see if he could find more information. Perhaps he could contact a group dedicated to World War I medals...

Mike wasn't sure how exactly to get his message across, but he eventually found a group called Worcestershire Memories, which was dedicated to artifacts and the history of the town where he grew up. He shared a photo of his medal, and pretty soon, his story was going viral!

Excited, Mike then asked his family in England for a favor. "I convinced my mother to take a trip to Worcester Museum to see if I could get more information," he said. Unfortunately, the curator at the museum wasn't able to offer much help.

Facebook succeeded where the museum failed. Someone who saw Mike's post was able to help him figure out that the medal belonged to A.G. George Hammond, a gunner for the 61st Division's ammunition column. Sadly, he died on June 12, 1917, when he was just 24.

Using his sleuthing skills on Facebook, Mike eventually was able to track down George's great-great-granddaughter, a woman named Debbie Evans. He sent her a message about how he wanted to reconnect her with the medal...

Debbie was, understandably, overwhelmed. She planned to give the medal to her aunt Carol, who was her family's oldest living relative. "I just got so emotional seeing the post on Facebook," she said.

In fact, while Mike was looking for George's family, Debbie had been doing some research of her own. She managed to acquire a photograph taken of her great-great-grandfather George just after he joined the service.

Between the medal and the photograph, Debbie was finally getting to watch George's life come into focus for the first time. She was delighted to discover that George was "the absolute spitting image of my eldest son, Lewis," she said.

With all of the information she had about George, Debbie was able to locate his grave in Arras, a town in Northern France. "As far as we know, we're the first family members to go and see his grave," she said.

"Previously... no one really knew anything about [George], who he served with, when and where. We were going to get his medals replicated through the correct channels but finding the original is mind-blowing," said Debbie. As for Mike, it was the perfect ending to a story that was decades in the making!