By Makanaki.Of.Naija (self media writer) | 1 year ago

Despite the challenges Manchester United has been facing recently in the world of football, they still remain my number one, my all time favorite 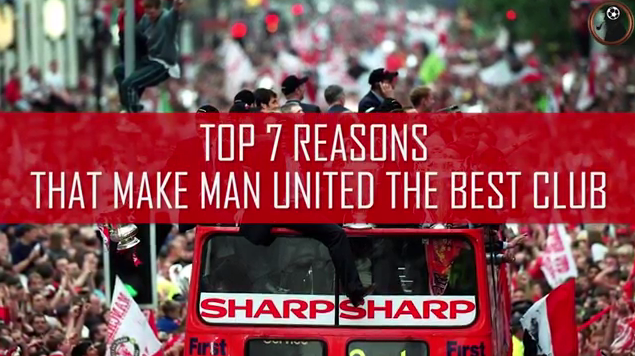 Today am going to share with you top 7 reasons why I think Manchester United "Remain a great club" in the world Even today. And am quite sure after reading those top 7 reasons even you would respect them.

1. Man-U is the most successful English club: Manchester united is the best club in England for the number of trophies. They have won 20 league titles and 12 times raise the FA Cup on the European arena. The Red Devils have won the Champions League three times and once brought home the Europa League Trophy. They're also one of the few teams in the world that made the trouble in one season while employees of the clubs museum indeed have a lot of work to do to keep all these precious cups shining.

2. Man united showed others how to use the academy system: Another tradition brought by Manchester United is the development of club Academy. Of course, football academies existed in other clubs, but it was met Buzzbee that shows how to get the full potential out of the youth system. In the 1951 - 52 season, United won the First Division title, the team was quite aged and buzzbee began to actively involve young players from the Academy. Things were going badly at first, but after just three years, these players won the league title, while the average age of the team was just 22. Despite the fact that today, Red Devils prefers bringing in expensive transfers, since 1937 United has not named any squad for a match that would not include at least one Academy player.

3. It is the oldest top club in the world: The club was initially formed as Newton Heath Football Club by a group of Manchester railway workers 1878. For example, Real Madrid was founded in 1902. While Barcelona and Milan in 1899. In 1902, the Newton Heath club was on the brink of bankruptcy, having depths over 2000 pounds. However, the club was bought out by local businessmen who saved it from disappearing. On April 26th 1902, Newton Heath was reborn as Manchester United.

4. Man-U has the most effective club management system: Sermon Buzzbee and Sir Alex Ferguson have coached the Red Devils for almost half of its existence. Many fans of football consider Ferguson, the best coach in the history, and he has 38 reasons to prove that. In the history of the club, there were just 19 managers, not counting temporarily acting coaches. compare to Barcelona and Real Madrid which have replaced more than 50 coaches over the past hundred years. Chelsea is another good example, since the beginning of the Abramovich era in 2004. Chelsea has already managed to replace 12 coaches.

6. Man-U has the most successful youth team in the world: Manchester United youth team won the FA Youth cup countless times, they're also dominant in the FIFA youth cup by their number of wins. They have won 18 trophies in total. By the way, Barcelona which is famous for its football academy, has one FIFA Youth Cup only three times.

So do you agree with the presented 7 reasons? Are this strong enough to grant the Red Devils the status of the best club in the world? Please share your opinion in the comments below.

Content created and supplied by: Makanaki.Of.Naija (via Opera News )