By Harfoofficial (self meida writer) | 16 days 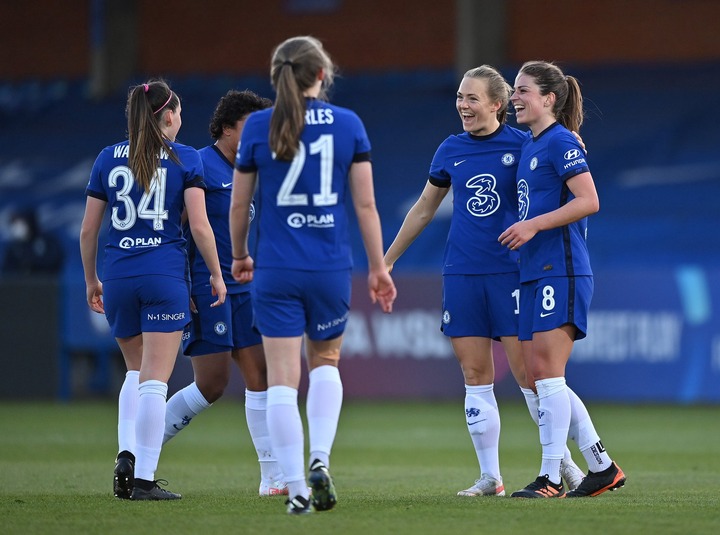 Emma Hayes' Chelsea Women team played away from home to Gareth Taylor led Manchester City Women side at the Academy Stadium, in their 20th league game of the season in the FA Women's Super League.

The visitor of the day were very impressive as they put up some dazzling displays with their physical, tactical and technical skills over the Gareth Taylor's side.

The game of the day was more of a title decider as it has a very crucial impact in the battle for the title race, with both side been separated with 2 points prior the clash of the Titans. Chelsea took the lead by opening the scoring sheet in the 25th minutes with Samantha Kerr the goal opener after an assist from Erin Cuthbert to make it one nil, thereby taking her tally of the season to 18 goals in the FAWSL.

The host were also decisive with their brilliant response to the lead, as they got an equaliser in the 29th minutes with Chloe Kelly getting on the score sheet to make it 1-1.

The Emma Haye led Chelsea team were able to take the lead again in the 34th minutes of the game as Pernille Harder made it two via a penalty, as she put the ball away from the spot to make it two goals to one going into the half time break. The second half of the game was so intensed as they both showed the stuff they were made of, as none was able to found the back of the net until the 75th minutes when the host levelled again with an equaliser from Lauren Hemp to make it 2-2.

All efforts from both ends to add to the tally of the day were not successful as the game ended two all draw at full time.

The result of the day means Chelsea now sit at the top of the table with 51 points in 20 games played, they are now 2 points cleared ahead of Manchester City Women who sit 2nd spot with 49 points in the same number of games played. Chelsea will now be looking forward to be back to winning ways in their next fixture with few games left to the end of the season, so as to keep the hope of been crowned the FA Women's Super League Champions alive.

Opinion: Meet The Most Handsome Police Officer In The Country (Photos)

How The La Liga Table Looks After Barca Drew 0-0 With Atletico Madrid Today.

10 Celebrities Who Look Way Younger Than They Actually Are