After Tottenham won Leicester City 3-0, This is how the English Premier League Table Look

I will be bringing you guys the English Premier League (EPL) table, after all the matches have been played, including Tottenham Vs Leicester City.

Hope you all enjoyed all the EPL matches for the today? To some that didn't watch the matches, don't worry because I will give few details of all the matches that were played, and also provide you with the new EPL table for today.

EPL fixtures for Saturday, 18th of July 2020 and their results.

Burnley went away from home to beat the already relegated Norwich City, after they got two red cards in the match.

Goalscorers: Chris Wood scored for Burnley in the 45th minute; Ben Geofrey scored an own-goal against Norwich in the 80th minute.

Epl fixtures for today, Sunday 18th of July 2020 and their results.

Bournemouth saw their chances of escaping from the relegation zone dashed, after Southampton beat them.

Tottenham dashed Leicester City's hopes of making the top 4 with a win against them today.

After Tottenham won Leicester City 3-0, This is how the current EPL Table Look. 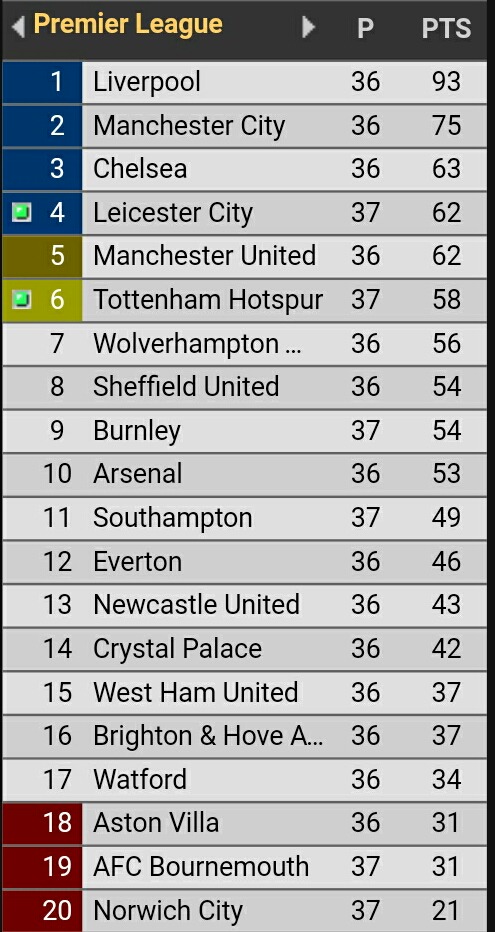 With the loss against Tottenham, Leicester are still placed 4th in the EPL Table, the same points with Manchester united and one point behind Chelsea.

Leicester City just have only one more match to play, and that is against Manchester United on the final matchday of the season.

Do you think Leicester City can still make the top 4?