By c.nananews (self media writer) | 23 days ago The former Real Madrid football club of Spain star continues his astonishing performance for the Red Devils, as he netted another goal to guide them to a well deserved victory over their opponent.

The five times Ballon D'or winner has been scoring goals for fun for the club since making his return to the team from Juventus football club this summer, and he was exceptional again for the team at Old Trafford. Cristiano Ronaldo opened his goal scoring for Manchester United football club in his debut game against Newcastle United FC, as he netted brace in their 4-1 victory, he netted a goal each against Young Boys football club and West Ham United FC, before scoring his 5th goal for the club on Wednesday night.

A goal each from Alex Telles and Cristiano Ronaldo were enough to give Manchester United football club a remarkable 2-1 victory despite the fact that former Barcelona star Paco Alcacer netted a goal for the away team. With Cristiano Ronaldo's goal, it means he has become the second oldest player to score for the Red Devils at Old Trafford in European competition;

"Cristiano Ronaldo (36y 236d) is the second oldest Man Utd player to score a goal in European competition at Old Trafford after Bryan Robson (36y 282d) vs Galatasaray in 1993." 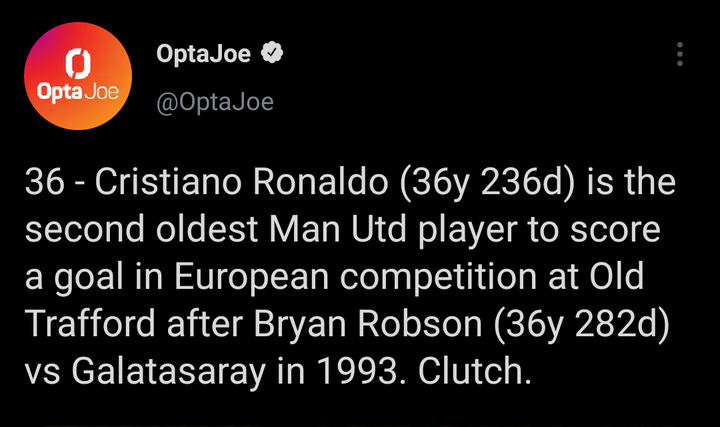 The Portugal star will now be looking forward to continuing his impressive run of form for Manchester United football club when they play their next League game this weekend.

One Key Area Man United Need To Strengthen Ahead Of Their Clash With Liverpool At Old Trafford.

Chelsea 7-0 Norwich: How some Chelsea stars performed during the match

Cristiano Ronaldo Reveals When He Will Retire From Playing Football