It wasn’t an easy journey for young Heaven. Born into a family of athletes, one would’ve thought her desire to give her male peers a run for their money in the sports world would’ve been a welcome one. 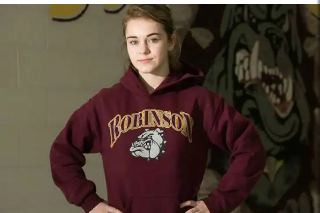 While this may have been the case if it came to sports like soccer and basketball, Heaven had no interest in shooting hoops or scoring goals. At the age of six, Heaven fell in love with a sport many considered “too dangerous” for girls to compete in.

Wrestling! Heaven had spent years in the stands watching her own brothers compete at meets and tournaments, though every time she expressed her own desire to wrestle, she was waved off. This resistance, however, only fueled Heaven’s passion even more. .  “I nagged my parents, basically, because I wanted to do what [my brothers] did,” Heaven recalled. “They didn’t want me to wrestle. I’m pretty sure it was because they didn’t want me to get hurt. But I would just be like, ‘Well, if they can do it, then I should be able to do it.'”

Eventually, Heaven’s parents relented, allowing her to suit up opposite a pool of all-male opponents. They waited breathlessly as Heaven took to the mat for the first time, but as soon as the ref blew the starting whistle, they were stunned.

Heaven was a natural on the mat, able to hold her own against opponents nearly twice her size. Even after taking a few good bumps and bruises, Heaven left the floor that day with a huge smile on her face — she’d finally found her calling. Over the next few years Heaven continued to hone her wrestling skills, eventually latching on with a local club team. But even as she began racking up wins left and right, her male peers weren’t exactly impressed.

Many of the male wrestlers Heaven crossed paths with weren’t convinced of her longterm success, especially as their bodies began changing and growing. At age 14, Heaven stood just 4’11” and barely weighed more than 100 pounds.

But what Heaven’s peers didn’t account for was the true measure of her ability: her heart. She immediately set to work weight training, determined to prove she was capable of going toe-to-toe with any of her male counterparts. She also began sparring with her older brother Caedyn in preparation for the more challenging match-ups she’d face in high school. Caedyn didn’t hold back when it came to wrestling his sister, though each time he tossed her to the mat, she only got up quicker.

“I can see now that when I’m pushing her the same kind of way, she deals with it a lot better,” Caedyn said. “It’s a lot harder for me to just kind of push her around than it used to be, so I can tell she’s really grown a lot.”

When it came time for Heaven to put her skills to the test on the high-school level, both supporters and critics waited with bated breath for the young star’s make-or-break moment. And just as she’d done before, Heaven left everyone speechless.

The 14-year-old dominated her freshman season, accumulating more than thirty victories over her all-male opponents, most of which by pin or unanimous decision. This, however, wasn’t enough to satisfy Heaven. She wanted to become a champion.

In fact, she nearly did so during her sophomore year in 2019, placing fourth in the North Carolina High School Athletic Association’s individual wrestling state championships. The achievement itself was a first in the state’s history — Heaven, however, wanted more.

So as the state championships rolled again in July 2020, Heaven was determined to be at her peak. She trained rigorously, and by the time she took the mat that February, her opponents stood shaking in their wrestling shoes.

Heaven made quick work of the field, dropping her first two challengers within minutes. But now, having reached the state championship finals for the first time in her career, Heaven found herself in uncharted waters

But there was no time for doubt; it was time to wrestle. Back and forth, back and forth, Heaven and her opponent traded positions in a lightning-fast chess match of brain and brawn — but every step of the way, Heaven was in control. When the final whistle blew, Heaven and her opponent made their way to the center of the mat, the entire crowd on the edge of their seats in anticipation of the final decision. The referee grabbed both wrestlers’ arms… and raised Heaven’s in the air! She’d done it! She’d won!

By an 11-3 decision, Heaven became the first female wrestler to win the North Carolina state championship and the first to win any state championship since 2006. The 16-year-old had finally reached the top of the mountain, though she knew her victory was about more than just a trophy.

“I’m just glad I can be a role model for [girls who want to wrestle] and it’s so insane to be inspiring to others,” an elated Heaven said. She was joining a long list of incredible women that motivate others.