By EnochObadiah (self media writer) | 1 year ago 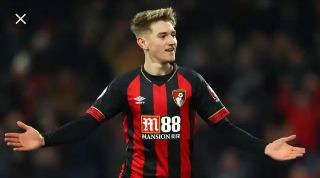 manchester United are now serious about bringing the Cherries winger to Old Trafford. Brooks has been impressive for the Cherries in the just concluded campaign, scoring one goal in nine appearance.

The 23 years old winger who was previously linked to Tottenham and Liverpool before joining Bournemouth from Sheffield United for a reported fee of £11.5m would be an easier deal than Brussia Dortmund Jadon Sancho who they value at £108m.

Dortmund has made it clear to United that they will not lower the valuation of Sancho who left, man city for Germany in an £8m deal three years ago.

Brooks has been on United radar for sometime and could be attainable for around £40m, with the Cherries needing to sell players following their relegation from the premier league.

Although Manchester united are yet to make contact with the Cherries winger but could make an official bid as their attempt to secure the signature of Jason Sancho hit a brick-wall.

Whether or not Brooks would be signed as a direct Sancho alternative remain to seen in the coming days.

Should man utd sign him or go for other options?

Content created and supplied by: EnochObadiah (via Opera News )