Ferguson, without a doubt, is the greatest manager in the history of Manchester United. After that, the club appointed four managers, who all performed to their ability. The club's current manager is Solskjaer. This is the comparison of Solskjaer with other Manchester United managers after Ferguson. 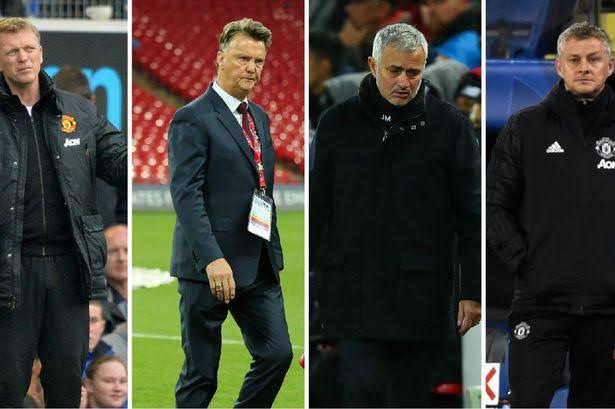 He spent only 10 months at the club and was not allowed to continue. He was sacked and replaced by Loius Van Gaal, who took the Netherlands to third place in the 2014 World Cup. Moyes was called the chosen one, because of what people believed he was capable of. He was not given enough time. He managed 51 games, 26 won, 10 drawn, and 15 lost. He won the Community Shield for the club.

The manager won the FA Cup for Manchester United in his second season against Crystal Palace. He was sacked for not returning the club to the Champions League. He managed 103 games for the club, 54 won, 24 drawn and 25 lost. After He was sacked, and he went ahead to criticise the owner of the club for putting Ed Woodward as the CEO. The club plays boring football under the former Barcelona coach.

The Special One was the most successful Manchester United manager after Sir Alex. He won three trophies for the club: the Carling Cup, the Community Shield and the Europa League. He was sacked after he lost his dressing room. He managed 144 games, 84 won, 31 drawn and 29 lost. During his tenure, Manchester United finished in the 2nd position behind Manchester City. The club only backed him in the first season with players like Ibrahimovic and Pogba.

He managed 450 games. He won 250 games, drew 87, and lost 123. He was signed by Molde, but he has not won any trophies for Manchester United. He has been to 3 semi-finals and a final. Pressure is mounting on the manager after they lost by 5 goals yesterday. He remains a legend, but he is not the man for the job and they might replace him very soon.