By ChinaruPeter (self media writer) | 10 months ago

Arsenal are set to compete with Everton for the signing of Schalke forward Matthew Hoppe, as reports indicate. 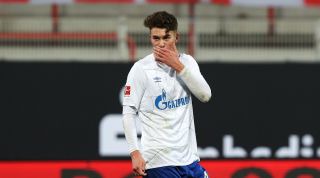 The 20-year-old was an unusual ray of hope for the German side during a dismal Bundesliga season during the final break.

Hoppe scored six goals in 22 league appearances in his debut season in the division.

The American didn't sign his first professional contract at the Veltins Arena until February, but he could be absent a few months later.

As reported by the Daily Star, Arsenal are among the clubs watching the young Californian.

The Gunners were impressed with Hoppe's Gold Cup performance, which looks like CONCACAF at the European Championship.

Hoppe was impressed as a left forward when the United States beat Mexico 1-0 last.

Moreover, he could be ready to move to the Premier League before the transfer window closes towards the end of the month.

Everton are also an admirer of the 20-year-old, who is said to be valued at just £ 4million by his current employers.

The Toffees and Arsenal have inquired about Hoppe's availability, with both clubs expecting to profit from Schalke's relegation to the second tier of the German pyramid.

It would be interesting to know what Arsenal's plans would be for Hoppe if he moved to north London.

Hoppe would likely be on the sidelines of Mikel Arteta's squad, or he could be on loan for a season or two.

Arsenal might even consider offering him to Schalke again for another year, as consistent weather in a competitive environment would only further his development.

Content created and supplied by: ChinaruPeter (via Opera News )