By san,ahmed (self media writer) | 1 year ago

It's no secret that Sonya Deville and Mandy Rose used to be best friends. The two have been linked to one another dating back to when they both competed on the sixth season of Tough Enough. They both later signed on with WWE in late 2015 and worked together down in NXT for two years before making their main roster debut. 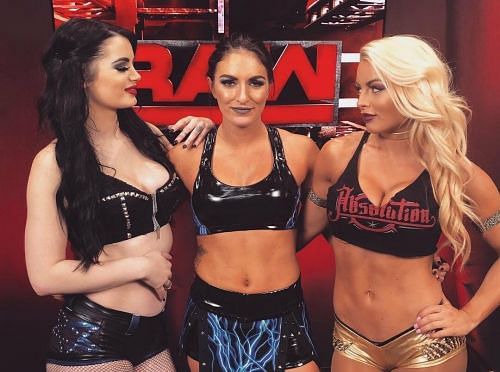 Fast forward three years and both Superstars find themselves in one of the hottest feuds in WWE. As we found out on Friday, this feud will come to a head at SummerSlam when the former tag team partners square off in a Hair vs. Hair Match.

Sportskeeda had the opportunity to speak with Sonya Deville this week, and she was asked about her and Mandy's early days on the main roster. The two debuted along side former Divas Champion Paige in late 2017. The Anti-Diva was making her triumphant return to WWE after undergoing neck surgery in the fall of 2016.

Being paired up with someone the caliber of Paige was a fantastic opportunity for Sonya Deville and Mandy Rose. Deville told Sportskeeda that the trio, known as Absolution, had major support backstage.

"I think big things we're definitely planning to happen with Absolution. I think from what I've heard at the time, everybody was really high on the group and it was, it was a cool dynamic. You know? You had Paige with her star power and her individuality, and then you had the blonde bombshell in Mandy, and then you had the badass fighter. So it was like, it was a cool little trio and I think it could have done great things."

Unfortunately for Absolution, fate had other plans. Not long after her return, Paige would suffer another injury to her neck. This time around there would be no comeback. Paige was forced to retire from in ring competition and instead of staying on to manage her new protege's, she was anointed the new GM of SmackDown.

Sonya Deville wishes she had more time to work with Paige

Following Paige's injury, Sonya Deville and Mandy Rose were sent out to find their own way. Over the next couple of years Fire and Desire would occasionally find themselves in some big match ups, but could never find sustained success. That is until earlier this year when they finally split up.

The former friends have been gaining traction with the fans since WrestleMania season when Sonya Deville tried to intervene in Otis' courtship of his precious preach Mandy. She was busted and outed by the mysterious (and since then M.I.A) hacker and it's been a wild ride ever since.

It may have taken some time, but Sonya Deville told Sportskeeda that she's where she's supposed to be now..

"Obviously everything in life happens for a reason... I would love to have worked with Paige longer and continue to learn from her. Cause she was, she was so great to, uh, just to be around."

"I always talk about like, how confident and how laid back she was. Like, you know, she'd have this crazy segment coming up and she'd be like cracking jokes just before she went out. Which kind of like the opposite of how I am. I'm like so intense the whole day, usually, you know, focused. So it was cool to kind of be around her and just see that, that level of experience and competence she had."

You can hear Sonya Deville's entire interview with Sportskeeda in the video above. Make sure to subscribe to Sportskeeda Wrestling's YouTube Channel for more exclusive interviews, videos and a whole lot more.