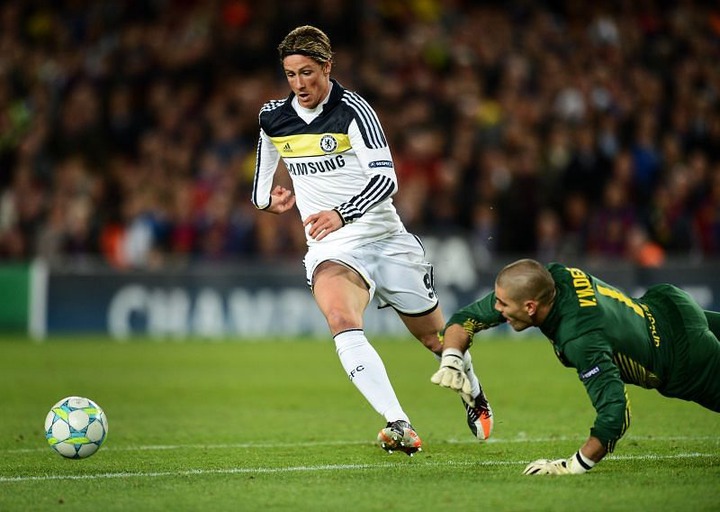 Fernando Torres’s spell at Chelsea was an interesting one, as the Spanish striker was adored for his time at Stamford Bridge despite not living up to his 50 million price tag. The Blues broke the British transfer record to sign him from Liverpool as Carlo Ancelotti snapped him up in January 2011.

While he was a firm fan favorite at Anfield, he forced through a move to Chelsea as he knew he could fulfill his lifelong dream of winning trophies at Stamford Bridge. Torres did just that as he won three major honors -- including the UEFA Champions League -- during his time with Chelsea.

Hailed as one of the deadliest finishers in world football in his prime, El Nino scored a handful of important goals for Chelsea despite not living up to the hype and is hailed as a cult hero at the club.

After leaving Chelsea initially on loan in 2014, Torres enjoyed spells with AC Milan, Atletico Madrid and Sagan Tosu before announcing his retirement in 2019. Aged 39, he is currently working with boyhood club Atletico Madrid as a youth team coach, having completed his coaching licenses in 2020.

El Nino’s Chelsea career was a bit of a roller-coaster ride, and here are his top five moments in a blue shirt.

5 First goal in a Chelsea shirt vs West Ham United

Three months and a staggering 16 games after making his Chelsea debut, Torres finally opened his account as a Blues player with a goal against West Ham United in April 2011. He scored Chelsea’s second goal of the game, as Ancelotti’s side won the game 3-0.

Torres scored 20 goals in 110 appearances for the club, but his first goal nearly three months after making his debut took some unwanted pressure off his shoulders.

Torres was running out of time to prove his worth at Stamford Bridge, but the Spanish striker gave a timely reminder of his qualities against Manchester City. Often slated for his lack of goals in a Blue shirt, he scored a last-minute winner against the Cityzens in front of a packed Stamford Bridge crowd.

Andre Schurrle had put Chelsea ahead in the first half, but Sergio Aguero restored parity shortly after halftime. Torres made his mark on the game with a well-taken goal in stoppage time as he finally endeared himself to the Chelsea fans after another bad run of form.

In the UEFA Europa League final against Benfica, Torres scored a stunning goal to inspire his side to a 2-1 victory on the night. Benfica looked like the better team on the night and were eager to cause an upset, but the Spanish striker had other ideas.

Torres didn’t score too many goals for Chelsea, but he had the knack of picking his moments, much like he did so in the UEFA Champions League in the 2011-12 season.

Although Branislav Ivanovic’s stoppage-time strike stole the headlines, Torres scored the goal that put Chelsea ahead on the night and performed well for the Blues as the focal point of their attack.

2 Memorable goal against Barcelona in the UCL

Arguably his finest moment in a Chelsea shirt, Torres’ late goal against Barcelona in the second leg of the UEFA Champions League will be remembered for a long time by Blues fans across the world. Ramires’ goal put Chelsea up on away goals, but Barcelona were eager to strike back and attacked relentlessly in search of a goal.

In the closing stages of the game, Torres received the ball near the halfway line and began to move forward with the ball. What followed next was etched in Chelsea history, as he calmly rounded Victor Valdes to score the goal that put his side into the final.

The rest, as they say, is history, as Chelsea went on to win the competition that year.

Despite scoring a goal in the semifinal, Torres was benched for the final as Didier Drogba was chosen to lead the line by Roberto di Matteo. Chelsea and Bayern Munich played out a 1-1 draw in normal time and needed penalties to decide the final.

Drogba scored the equalizer and winning penalty on the night, as Chelsea were finally crowned kings of the continent after an unbelievable season in Europe.

Torres came on as a substitute, but the Spaniard finally realized his boyhood dream of winning major trophies, as he won Europe’s premier club competition just over a year after leaving Liverpool.