Barcelona predicted line up vs Osasuna: Starting 11 for Barcelona

By Tambiri.infonews (self media writer) | 1 year ago 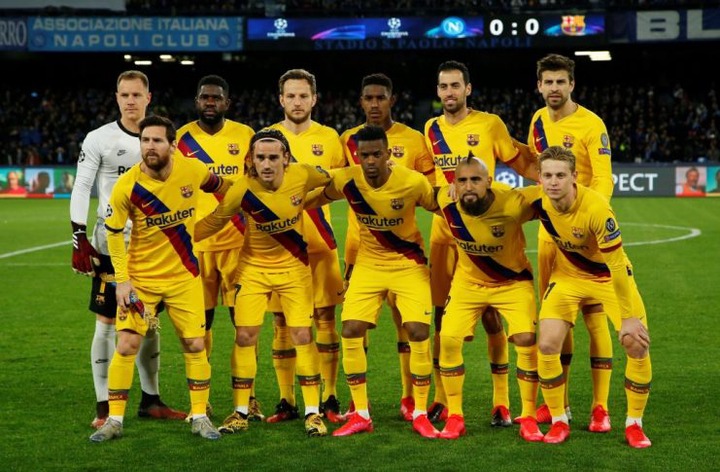 Here is the expected Barcelona line up vs Osasuna:

Looking for the predicted starting XI for Barcelona today vs Osasuna

In goal, we can expect Ter Stegen to continue. He has been a pillar for Barcelona. In defence, we can expect to see Nelson Semedo at right back, Alba at left back. Gerard Pique should be back with partnering Lenglet in defence.

A three man midfield Sergio Busquets can be expected at the base and Ricky Puig and Sergi Roberto making it three in midfield.

In the wings, we can expect the magnanimous Lionel Messi to lead the line and Antoine Griezmann on the left while Vidal or Suarez plays on the right. Ousmane Dembele remains on the sidelines with a long-term hamstring problem, while Samuel Umititi is also out with a knee injury – but might just make a return in the Osasuna fixture.

Frenkie de Jong, who has been on the sidelines since the middle of June with a calf injury, had returned to training and played in the Valladolid match – and can be expected to feature on Thursday night too.

Antoine Griezmann had spoken of a ‘discomfort in his quadriceps’ and was taken out of the Valladolid match. However, it’s a mild injury and he will be making a return in the Osasuna clash.

As for Osasuna, Chimy Avila is going to be out for the remainder of the season.

Here we will give you answer on the most frequently asked question about Barcelona – Osasuna.

Barcelona picked up and emphatic victory in the reverse fixture against Valladolid and thrashed the La Liga outfit by a margin of 0-1 at the Camp Nou.

Barcelona face Osasuna at Camp Nou Stadium on Thursday evening. Both teams need the win for different reasons, with Barca looking to fight their way for a third consecutive La Liga title.

The Blaugrana are just coming off their relief after winning 1-0 over Espanyol and Valladolid with Setien breathing a sigh of relief after sacking rumours surfaced. They are ready to collect three more points – easily – from the 11th placed team in the table.

This season is not looking the best for them as the end of La Liga 2019-20 campaign is nearing and have to compete with ones at the second position.

Content created and supplied by: Tambiri.infonews (via Opera News )