By Footballfocus (self media writer) | 2 years ago

Arsenal will look to extend their resurgence to winning ways as they welcome Man City tonight in Emirates stadium in a FA Cup semi finals.

Arteta men in their last match which was in premier league, beat champions Liverpool 2-1. A game where mistakes from Van Dijk and Alison gave lacasette and Nelson an opportunity to get on score line. 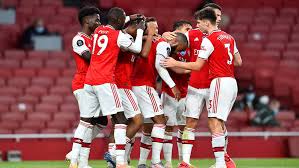 Tonight, they will also be facing FA Cup defending champions who have already tore them apart this season by beating them in both premier league home and away matches by a score line of 3-0.

Arsenal won their quarter finals match 2-1 against stubborn Sheffield United by a die minutes (90'+1) goal from ceballos ensure their progression into the semis.

Of course Arteta men will look to contain Pep Guardiola side here at Emirates stadium to break Guardiola run of winning against arsenal.

Man city that won the community shield in the beginning of the season and won carabao cup against Aston Villa in march to make it three win of carabao cup in three successive season. City will do all it takes to reach the final so as to extend their dominance in England even though they came Runner up in premier league.

Man city always find it so easy to win against arsenal side under Pep Guardiola even since the time of Arsene Winger. But could they repeat such against Arsenal now manage by Arteta even though they have won against him too.

Tonight is going to be an interesting match with Arteta who happens to be former Guardiola assistant at Man City now a boss of his own at Arsenal.

Let take a look at the players that will be starting for both teams.

Let see who get all the three points tonight at Emirates stadium.