Double after Double; What an Incredible Season for the Chelsea FC Women's Team

By Subdean (self media writer) | 1 year ago

It's no more a news that some Major Leagues were rounded up before completion due to the alarming rate of the COVID19 pandemic. Among such leagues are: French League 1 with Paris Saint Germain crowned the Champions and Barclays Women's Super League having Chelsea FC Women as the Champions.

The Chelsea FC Women Team performed laudably in the just concluded season, recording 12 victories and 3 draws with no lose before the Season was curtailed and they became the Champions. In the same token, they also won the Continental Tyres League Cup after dealting a big blow on Arsenal in a 2-1 defeat in February. As a result, Chelsea FC Women ended the season with Double Cups to their Trophy Cabinet. Yet again, The CFC Women have recorded another double honours in the 2019/2020 season, as the Head Coach (Emma Hayes) and the Attacker (England) are both honored with the overall best Coach and Player of the tournament respectively. 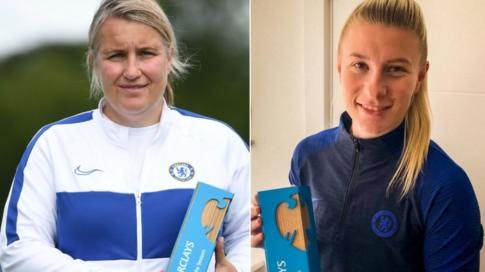 Emma Hayes whose arrival dated back to August 2012 after succeeding Mat Beard as the Head Coach, has since had a wonderful spell so far. She has been in charge of the team for almost 8 years winning 87 out of the 152 games played since her ascention as the manager of the team. She has won total of 7 trophies and making the landmark as the first head coach to win the Women's FA cup in 2015. Interestingly, she was tipped to become the Chelsea FC men team before the arrival of Head Coach Frank Lampard and also in the list of the possible replacement of Phil Neville who has announced his withdrawal from England's Women Team. She has indeed won many individual honours and still counting in the coming years. Beth England has proved herself as an incredible player finding the net 21 times in all competition and 14 times in the Domestic League in the 2019/2020 season. In fact, England finished as Chelsea's top goalscorer for the 2018/19 season with 22 goals in all competitions. Meaning that she topped the Chelsea goal scoring chart for two seasons consecutively.

She scored a wonderful goal in the Blues' 2019/20 opening campaign of the Barclays Women's Super League from 30-yards in Stamford Bridge against Tottenham Hotspur and also netted both goals in their 2-1 win over Arsenal in the Continental Tyres League Cup final in February 2020. Her hardwork earned her senior international cap in August, as she came on from the bench as a substitute in a friendly against Belgium. The result of being hardworking is success coupled with silver wares, just as the case of this two laudable individuals who have contributed their quotas to the success of their team and are being rewarded for their contributions.

Content created and supplied by: Subdean (via Opera News )