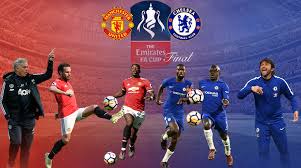 The beautiful game of Football might seem pretty easy to predict in our minds, and The strength of both teams involved.

The match started with less enthusiasm from the fans of the away team, which banked on history on repeating itself onces again.

Not just the fans of the home away team but various pundits,by, large, Great and small.

The away team stood a better chance of losing the game according to 3 factors. The first game of the season between Chelsea and Manchester United ended 4-0 in favour of the team from Manchester, Second and third Matches ended 2-0 and 1-2 Respectively to Manchester united.

Seeing How Chelsea has always fallen like a pack of cards when Ole's Men come visit or hosted, You wouldn't have doubted any pundits who expected a 4 over 4 to be done by Manchester United, knowing Fully well that The champions Hosted the underdogs, It was Final in the bag for Manchester United.

The Away Fans(Chelsea FC), Never gave their team a chance, and the home team fans were a bag full, confident the match will go in their favour.

But the match ended up having a Philosophically Taste,branding and looks.

The Match Result was a defination of what the Entire 4 meetings Result between Manchester United and Chelsea has been this season.

Manchester United have won 3 Game out of the 4 total played against Chelsea this season so they had a better Head to Head as far as this season is concerned, while tonight victor,Chelsea FC, just secured it first victory after 4 meetings. The match result was 1-3 and it ended in favour of Chelsea.

Another beautiful stats, two London teams, Chelsea and Arsenal defeated the two team from Manchester to Cruise into the final. it the F.A cup and it coming back to London.