By RalphChidozieGeorge (self media writer) | 3 years ago

Emboldened by the failure to hit it off big with his first trip to Sweden, Chisom Egbuchulam has risen to become the Player of the year at K-League 2 side, Suwon FC in South Korea.

From a humble beginning at Disdevit of Africa, a small academy ran by former player, Austin Igweokolo in Enugu to the Coal City giants, Rangers International FC where he played for four seasons.

After his season to remember with Suwon FC, Egbuchulam has a lot to say and celebrate and he opened up to me like never before. 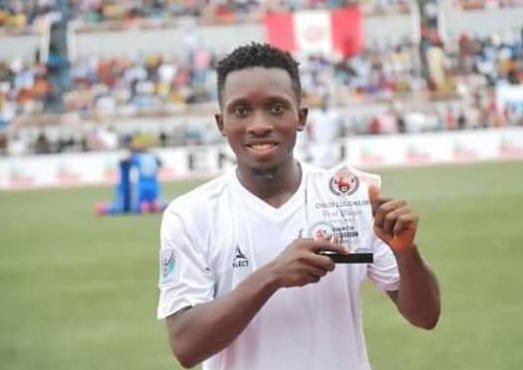 "I spent four years at Rangers, the first three years were really tough but the fourth season was really big, that was 2016, we won the league and I won my team's best player and NPFL second top scorer with 16 goals and capped it with Nigeria Player of the year at the Nigeria Sports Awards." Egbuchulam said.

The quartet came to be known as C.A.N.E (Clement, Aguda, Nwobodo, Egbuchulam).

He scored a total of 38 goals and 18 assists in his four years at Rangers International.

After his performance in the 2016 season, most soccer fans concluded that his days were numbered on the home front and truly so he joined a Swedish second tier side, BK Hacken on a one year loan deal despite earlier promising the Enugu State Governor that he will play one more season with Rangers to consolidate the team's victory in the 2017 season.

"I couldn't just stay, the lure of Europe was so tempting" he said. 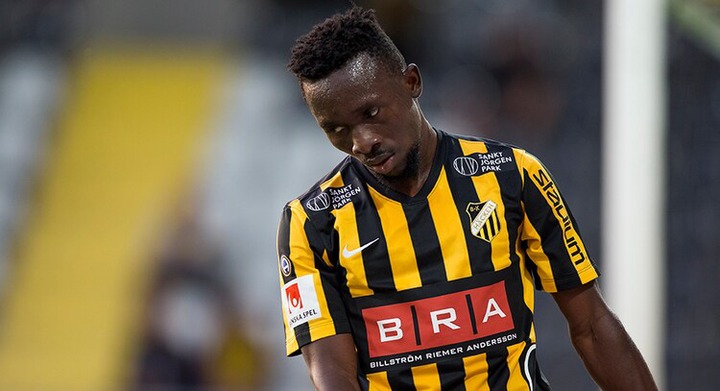 The BK Hacken deal turned out to be an anti climax for him.

"I did not get the kind of opportunities I wanted at the Club and I was really affected by the weather."

"I arrived in January 2017, it was not what I expected as I was coming from the dry season in Nigeria to the most chilly Winter in Sweden and you know Sweden has one of the most inclement weather in the world" He said.

"My adaptation was very slow and I had only a year contract, though with an option of a three year renewal which they didn't choose at the end"

"I played only ten games of which I started just four, I also played one Cup game in which I scored a hat-trick. I played most of the games of the second team and scored 15 goals but that counted for nothing as the main team games were what they used in judging me and it wasn't good enough"

"So, yeah, my first experience in Europe was not that pleasant but I knew what I am capable of so I never let that affect me much" he added.

After the team refused to extend the deal he returned to Nigeria but was not welcomed at Rangers even when he was still a bonafide player of the team, not because the technical crew didn't want him but because of the fear of the State Governor who was still unhappy with the way and manner he left the team.

Egbuchulam was however never interested as the only thing in his mind was to return to Europe and he stayed away from Rangers trainings thereby raising speculations whether he still had contract with them or not.

"He was ashamed of returning" an official of Rangers said at that time.

Few Months later he returned to Sweden but not to BK Hacken but to another second tier side, Falkenbergs FF. 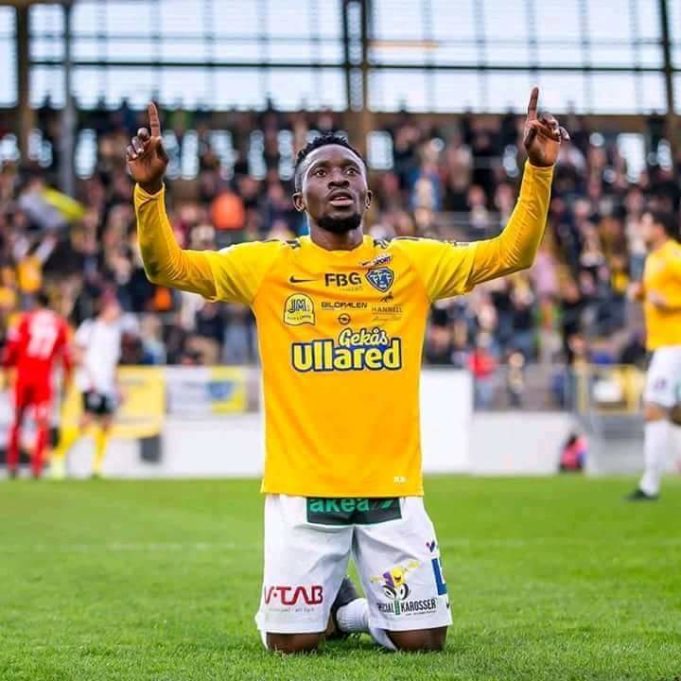 "It was a great journey for me at Falkenberg as I hit the ground running having adapted to the weather and style of play with my first experience at Hacken, the presence of fellow Nigerian, Dominic Chatto and Enock Kwakwa from Ghana also helped me to settle in fast and I finished the season on a high note."

"I had a fantastic season at Falkenberg, I helped lift the Club, scoring sixteen goals, fourteen in the league and four assists that helped them to gain promotion to the top division as well as two goals in the Cup and I was really happy."

"They wanted me to stay but then again I had to move to Korea." The 27 year old said.

No one saw the move to the far East on the line for him as everyone expected a better deal in Europe or even stay with the newly promoted Falkenberg and play in the Allsvenskan (Swedish top league) especially after a great season. 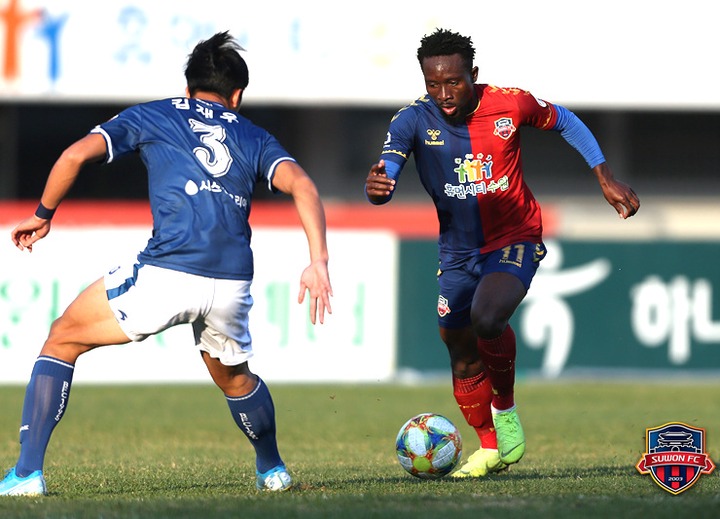 "At first when I got to Korea, everything was strange, new continent, new language, new Club, new style of play and it wasn't easy but I had to adapt very quickly as I didn't have eternity to impress and being one that loves new challenges in my career I had to do that quickly."

"The rest as they say is history, top scorer in my team with 18 goals, second top scorer in the league, the top scorer beat me with a goal and then I emerged Suwon FC's player of the season." He said excitedly.

Chisom also revealed how his exploits has helped to rekindle the interests of the Koreans in Nigerian and African players.

"When I arrived in Korea, the question fans were asking was why sign an African player?, they have the believe that African players do not and can not succeed in Korea as the few who previously came according to them, failed, that even helped to spur me on and I was determined to prove them wrong." he disclosed.

some Nigerian players who previously played in Korea didn't make much impact.

Alex Agbo was the first in 1997 when he turned out for Cheonan Jilwa Chunma FC followed by Ajibade Babalade who played for Anyang LG Cheetahs, both in 1997.

John Zaki of BCC Lions fame played for Jeonbuk Hyundai Motors in 2000, Lucky Isibor was on the books of Suwn Samsung Bluewings in year 2000.

two other players, Obinna Nkeodi in 2002 and Augustine James in 2003 also tried their lucks in Korea for Daejeon Citizen and Bucheon SK respectively.

The players above didn't make lasting impressions on Korean soccer fans and so much was expected from Egbuchulam.

"As a Foreigner, so much was expected from me and there were lots of pressure and I thank God I did not disappoint and I will say, yes I conquered Korea, I scored eighteen goals in the league and one assist and two goals in the Cup for twenty goals this season but sadly my team didn't grab play-off ticket to play for the much desired promotion." He intonated. 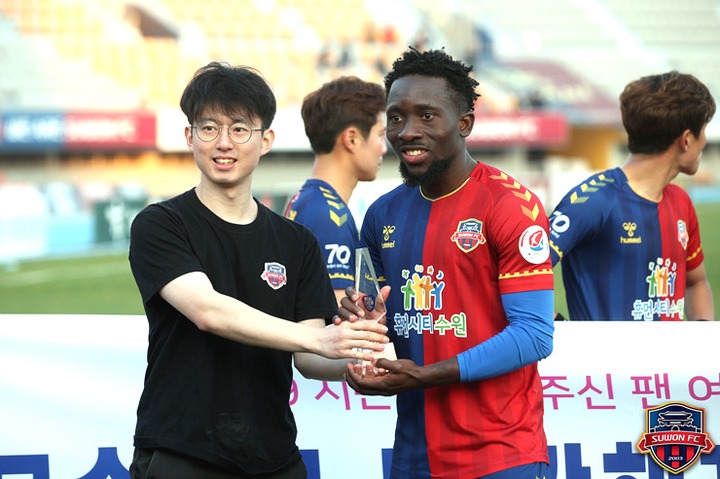 "Mid way into the season, around July I was making so much waves that Korean Clubs started looking for Nigerian players again, that was when Incheon FC signed Olarewaju Kayode from Denizlispor of Turkey as well as my former Rangers colleague, Christian Osaguna signing for Jeju United from Iranian side, Zob Ahan SC and more players are being sought after."

His team is also seeking to add another Nigerian to their squad.

"Presently Suwon wants to sign another Nigerian, Michael Omoh, a midfielder from Mjallby AIF of Sweden." He confirmed.

"So I will say that God used me to open the door for others and break that jinx that African players can not succeed in Korea because now they see them differently, if Chisom can succeed why not others."

"Korea has been good to me, from my team's Technical crew to the players and I am the only black player in my team and was the only one in whole K-League 1&2 as at the time I arrived."

"The fans have been amazing truly and I think it's the best experience for me so far in a Foreign land." He enthused.

"The interesting thing is that I was able to change their mentality about signing of Nigerian players and am surprised that some Clubs even called me to enquire about certain Nigerian players that they wish to sign, that is fulfilling for me" He added.

After conquering Korea, what's next for Egbuchulam?

"My One year Contract ends at the end of December but my agent told me that they are talking just as there are other offers from different Clubs in Europe."

"After their discussions we will know the next move if am going to stay in Korea or a move back to Europe or elsewhere, you never know." 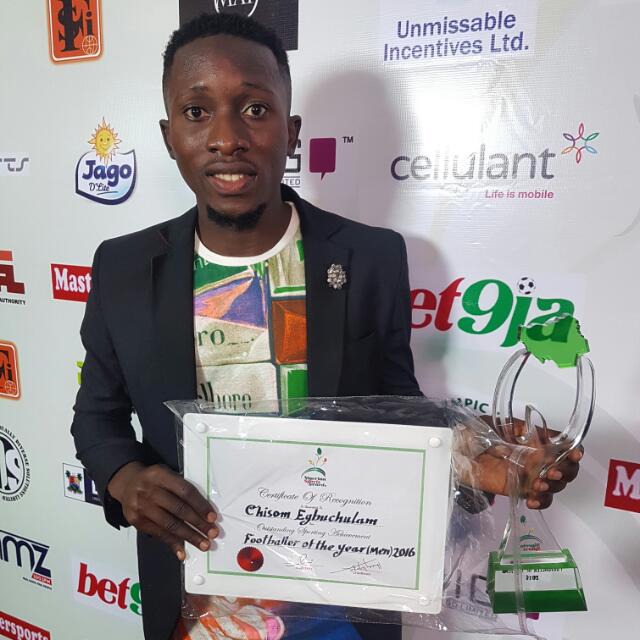 With his great exploits in 2016 NPFL season, Egbuchulam was invited to the senior National team and was an unused substitute as the Super Eagles beat Chipolopolo of Zambia 2-1 in a third round game of the World Cup Qualifiers in Ndola.

Asked if he is disappointed not getting another invitation despite his Club form from Falkenberg to Suwon, the Enugu born forward said.

"I am not disappointed as the current players are doing very well and most of them play at top Clubs in Europe. If you look at the set up now there is no space available as the players are getting the results."

"Don't get me wrong, not that I am not deserving of a call as am equally doing well too at my Club, if there is an opportunity and I am invited I will jump at it and do my best representing my Country." Egbuchulam concluded.

Content created and supplied by: RalphChidozieGeorge (via Opera News )