Five Players PSG Have To Sell Because Of Financial Fair Play. 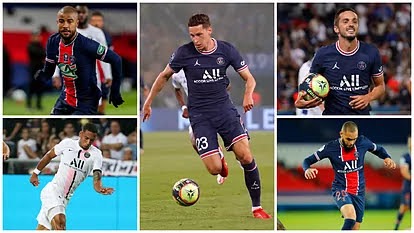 Technically, Paris Saint-Germain have only spent € 76 million this summer, given that Lionel Messi, Gianluigi Donnarumma, Sergio Ramos and Georginio Wijnaldum all came in for free. The only transfers that the club had to pay were the option to buy Danilos for 16 million euros and 60 million euros for Achraf Hakimi.

But financial fair play looms over the club and the huge salaries of the new signings have PSG looking to move multiple players before the transfer window slammed shut. According to Le Parisien, the club will seek to sell at least five players.

The man who could attract the most attention is Thilo Kehrer, a 24-year-old central defender valued at 25 million euros by Transfermarkt but who is behind Marquinhos, Presnel Kimpembe and Ramos in the hierarchical order. Pablo Sarabia was the starter of Spain in Euro 2020, but he is another who could leave, valued at the same 25 million price despite being almost 30 years old

Julian Draxler is another, valued at 20 million euros, who he has never been a regular on the team despite having been in Paris for four years. Rafinha and Layvin Kurzawa complete the list, and PSG hopes to move them before August 31.