From ﻿All Football App, we have an update about a Manchester City teenage Player known as Cole Palmer who has played two matches and scored a hattrick, just in day.

Manchester City played against Burnley in the Premier League Saturday match. They also played against Leicester in Elite Development Squad (U23). In both matches, Cole Palmer was featured. 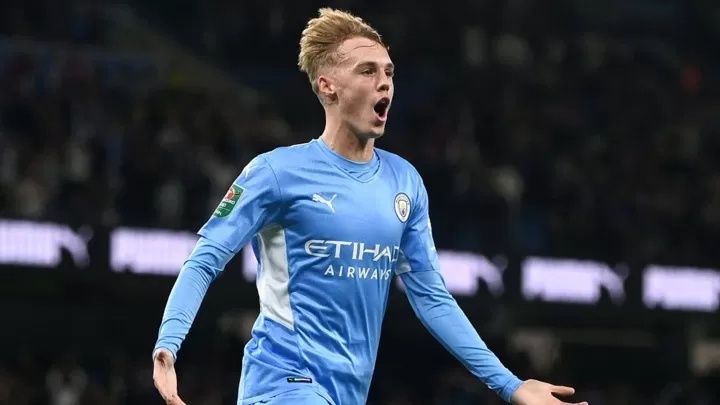 As a star in Premier League 2 level, Palmer has just struck his sixth time of scoring multiple times in a game for the EDS since this season, with his Saturday hattrick.

This attempt was made more remarkable due to the fact that Palmer was still able to deliver after some hours earlier of being on the pitch across the road at the Etihad stadium for his second appearance for the City big boys.

Palmer is now seen as a regular in Guardiola’s squad, and he is gradually making a huge impression on Pep Guardiola with both his attitude and his quality.

The 19-year-old Player made his appearance as a 90th-minute substitute against Burnley, and from there gained more experience, with which he was able to deal with their opponent when the EDS game later kicked off in the evening of the same day, in a match which ended in a 5-0 win for City.

Palmer is quoted to have said that everyone wants to play games, so whenever he sees the opportunity, he would think he might as well come and play, so that's what he does.

He went further to say that he is doing what he loves, so he can't really complain. Even though, it is hard to keep focused all day and keep the energy, yet he still enjoys it. He is quite Hopeful of getting more minutes, so as to keep pushing with the first team.

From the aforesaid, it could be garnered that it is this willingness from Palmer to make himself available for both games that caught Guardiola's eye, and it also impressed the EDS coach Brian Barry-Murphy too, who was delighted to have the midfielder in his side.