Just a short while later, it was revealed that Mustafa Ali, also a babyface throughout his WWE run had turned heel when he revealed himself as the leader of RETRIBUTION. 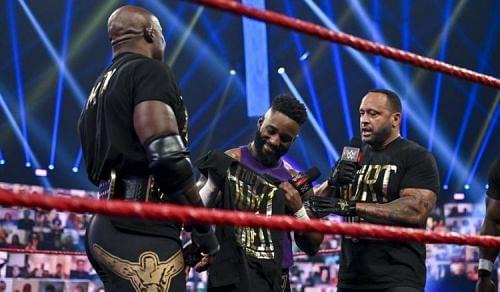 It's an interesting situation because it likely means that we will see the two old rivals Cedric Alexander and Mustafa Ali clash horns in the near future. The last time they had a full-fledged important match was at WrestleMania 34 to crown a new Cruiserweight Champion.

Cedric Alexander recently appeared on Table talk with DVon and spoke about how he watched Mustafa Ali's recent turn unfold before his eyes (H/T WrestlingInc):

"Honestly, I was sitting back and watching it unfold. I was extremely surprised," Alexander said. "Honestly, in a weird way, it made me excited because I've been waiting to get a hold of Ali again ever since we had our match at WrestleMania [34]. Now that Ali decided to make better business decisions than hanging out with Apollo [Crews] and Ricochet, I'm interested to see what he's really going to do. I've always thought that Ali had a bit of a mean streak. He was one of the nicer guys in the locker room, didn't really cause a lot of trouble."

Cedric Alexander described it as an 'oxymoron' since he was trying to be a friend who will now be an adversary - referring to The Hurt Business' feud against RETRIBUTION. Alexander then said that he's looking forward to the challenge again, boasting about Mustafa Ali's lack of success against him:

"Mustafa Ali has never beaten me in any way, shape, or form," Alexander said. "Singles match or tag-team match, Ali has never beaten me. So, that's part of why I'm so excited that he decided to join RETRIBUTION. Now, I get to get my hands on Ali again and see if he actually learned something from me the last few years we've been apart."

What will Cedric Alexander bring to The Hurt Business?

Cedric Alexander is the youngest star of The Hurt Business and while Bobby Lashley appears to be the main man while MVP is the voice of the faction, the eye to the future goes to Cedric Alexander.

It's going to be interesting to see how his run with The Hurt Business plays out. The consensus is that it was a much-needed character change for the former Cruiserweight Champion. For starters, frequent TV time is a good way to have an upward trajectory.