By DebbyJ_writes (self media writer) | 1 year ago 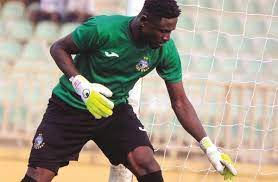 Following a rollercoaster six months of playing in the Nigeria Professional Football League and the CAF Champions League for Enyimba International FC of Aba, John Noble has gone from unknown to household name. The Rivers State-born goalkeeper's first call up to the national team has exceeded all expectations and is a reward for his scintillating recent performances.

When Enyimba announced the signing of Noble on a three-year deal from Cameroon's Panthère of Nde last August, it seemed like yesterday.

He had previously played for ASCK Kara, where he was also a member of the team that won the CAF Champions League last season for the Togolese champions, before moving to Panthère.

He won the Togolese championship and Cup with ASCK de Kara in 2018, and Enyimba is his first real shot at a major club in the Nigerian Premier League.

Noble made his debut in the CAF Confederation Cup tie between Enyimba and Rivers United, when the match went to a penalty shootout and Noble saved two penalties before scoring in sudden death for the Aba club to beat fellow Nigerian club Rivers United 5-4 on penalties after the two-leg match ended 1-1 on aggregate.

His clean sheet in goal for Enyimba in the NPFL became the talk of the town, and the Super Eagles technical staff did not hesitate to call him up for the AFCON ties.

“My father was a footballer, so I believe it runs in the family,” Noble told NationSport. “Right from childhood, according to my father, I loved going to the field back then,” Noble said.

Noble, who began his professional career in Togo, claims the NPFL varies from other African leagues in terms of structure, and that Enyimba will contend with the best teams on the continent.

“What I see as a disparity between the leagues is the structure, since the NPFL is well structured in contrast to Togo and Cameroon,” he said. Despite the fact that the Nigerian league does not meet European standards, it is well-organized in comparison to others I have played.”

Noble described receiving an invitation to the national team after just six months of playing in the NPFL as "awesome": "I feel very pleased because I only entered the league for six months and I got the invitation." It is a happy thing, but I am conscious that it is the product of hard work, and I will continue to work hard.

“Goalkeeping is something I enjoy doing, and everybody has their own passion, so I'm going to go in there and give it my all for the country because this is a once-in-a-lifetime chance for me to be a part of such a fantastic squad.

“This is my first time at camp, and the experience with the team has been fantastic. I've been so happy since I arrived at the camp on Monday, and the atmosphere has been really encouraging thanks to the players' fun and cooperation. The relationship between the foreign-based and local players has been outstanding, and everybody in camp plays together as a family, which brings me great joy. I'm overjoyed, and I know it'll be a tough time, but I'll give it my all and do my best by working hard and leaving the rest to God,” Noble said.

Noble's respect for former Super Eagles captain Vincent Enyeama, whom he described as his role model, is unmistakable.

“When I was starting out in goalkeeping, Vincent Enyeama was my role model. I kept clips of him on my phone even though I never had physical contact with him, but I always told myself and prayed to God that whatever happened to Enyeama being the national team's number one goalkeeper will happen to me, and here I am today in the team moving closer to that dream,” he said.

He did, however, express faith that the Eagles would beat Benin Republic tomorrow, and he urged NPFL players to practice harder in order to be sure of making the national team.

“We hope to win on Saturday (tomorrow) because the team spirit and camp environment have been outstanding. Also, I'd like to encourage my fellow league players to keep working hard and believing in themselves that this kind of chance will come their way one day,” he added.