3 reasons why Cristiano Ronaldo is better than Lionel Messi

The rivalry of Cristiano Ronaldo and Lionel Messi did not start today as,it has been for the past decade,which many regards as the greatest rivalry that will go down in football history.Lionel Messi has 6 balon d'or awards with Cristiano Ronaldo just one shy.Here are my reasons why Ronaldo is better than Messi.

1)Ronaldo has played in different leagues

Cristiano Ronaldo has played in Portugal with Sporting Lisbon,in England with Manchester United,in Spain with Real Madrid and currently in Italy playing for Juventus,while Messi has since the start of his career been playing for Barcelona in Spain and many will argue,Messi has not been tested in order leagues,but Ronaldo has been tested in different leagues and still remains top notch, winning titles and gathering personal awards.

2)Ronaldo has international trophies,while Messi has none

Lionel Messi has not won any senior trophy with Argentina, since the start of his career,He lost two Copa America finals to Chile and lost the 2018 World cup final to Germany. Cristiano Ronaldo on the other hand has won the Euros 2016 with Portugal and UEFA Nations League, the latest he has won.

3)Lionel Messi played with football greats,who helped him during his career,while Ronaldo has heavily relied on himself.

Lionel Messi has shared the football pitch with greats like Ronaldinho Gaucho,Xavier Hernandez,Samuel Etoo,Andrès Iniesta,etc and many will argue that these footballers have played a large chunk in Messi's career and since these players left,Barcelona and Messi has struggled a lot.On the other hand,Cristiano Ronaldo although having played with great footballers have not relied on them for support,He performed well even after leaving Manchester United and Real Madrid and now at Juventus where you could say no real great footballer shares the pitch with him.

The point is Ronaldo does the magic himself,while Messi relies on others for him to do the magic. 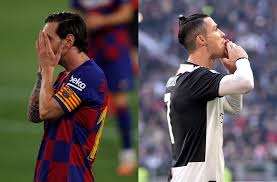