By Niceguy (self media writer) | 19 days ago 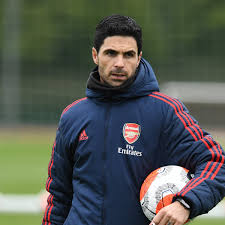 Arsenal's dramatic north London derby triumph was dedicated to the club's fans, who created an atmosphere as remarkable as his team's performance against Tottenham.

With a resounding 3-1 victory over Spurs on Sunday, Arsenal leapfrogged Spurs in the Premier League. Emile Smith Rowe, Pierre-Emerick Aubameyang, and Bukayo Saka all scored in a dominant first-half blitz.

Arsenal won their third league game in a row, putting an end to a terrible start to the season in which they had lost their first three games.

Arsenal manager Arteta told Sky Sports, "This triumph is for the fans." "They were great during difficult times when we needed their help."

"It doesn't get much better than the ambiance we witnessed here today." It was one of the most pleasant experiences I'd ever experienced, certainly in this stadium.

To win it the way we did, and to feel that connection with our teammates and supporters, it was a once-in-a-lifetime experience.

"If we don't have fans here, it will be impossible to attract people and have them connect with what we're trying to accomplish. It's a huge difference. We aim to amuse them and play in a way that they will be proud of."