Between Romelu Lukaku And Pierre-Emerick Aubameyang Who's the best

By Seunstev (self media writer) | 1 year ago The Belgium international and inter Milan Striker Romelu Lukaku A great player of our time who has worn the shirt of many clubs across Europe with the likes of Chelsea, WestBrom,Everton, Manchester United and currently in AC Milan has been considered by many football fan to be a player with so much enthusiasm and physically inclined player. So far in His Premier league record,He has made 252 appearances and has scored 113 goals.

So far this season, He has played 42 Matches for Inter Milan and has scored 26 goals and provided 5 assists 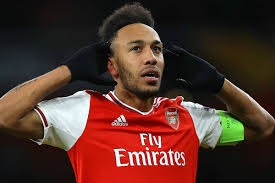 The Captain of and forwarder of both English side Arsenal and Gabon national team Pierre-Emeric Aubameyang has been considered by many football fan to be one of the best strikers in the world with his dribblings, pace, movement, and finally his finishing touches on the pitch is very magnificent. He has played for renown clubs across Europe with the likes of AC Milan, Dijon, Lille, Monaco, Saint-Etienne, Borussia Dortmund and currently in Arsenal .

So far in his Bundesliga record he scored 94 goals in 144 appearances.

More so he has played 63 matches for his national team and has scored 25 goals, he was a key player of the Gabon national team that reached the Quarter finals of the 2012 Africa Cup of Nations.

Content created and supplied by: Seunstev (via Opera News )