How Solskjaer Could Line-up Against West Ham With Martial, Matic and Cavani

By D_informant (self media writer) | 4 months ago

Manchester United has been performing flawlessly in their domestic game, as they are yet to lose a match in a domestic game. They performed greatly against West Ham with a great comeback. They won the match 1-2, with Jesse Lingard and David De Gea being the match winners. Manchester United will face West Ham again in the EFL cup tomorrow, Ole Gunner Solskjaer should consider making some changes in the playing squad so as not to cause fatigue. He should consider starting Jesse Lingard, Anthony Martial, and Matic. Here is how he could lineup against West Ham with Martial, Matic, and Cavani:

1. Goalkeeper: Tom Heaton, the English man could get his first competitive start of the season, with the unavailability of Dean Henderson and David De Gea should be rested, due to their upcoming premier league game against Aston Villa.

3. Central Back: Eric Bailly, the Ivorian should also get a start against West Ham as he has not featured for Manchester United in any competitive game this season. Ole Gunner Solskjaer should rest Harry Maguire and start Bailly instead.

4. Left-back: Luke Shaw, the English man will start, due to the absence of Alex Telles. Luke Shaw has played in all Manchester United games this season.

5. Right-back: Diogo Dalot should get a start against West Ham. Aaron Wan Bissaka should be rested for the next premier league game against Aston Villa. 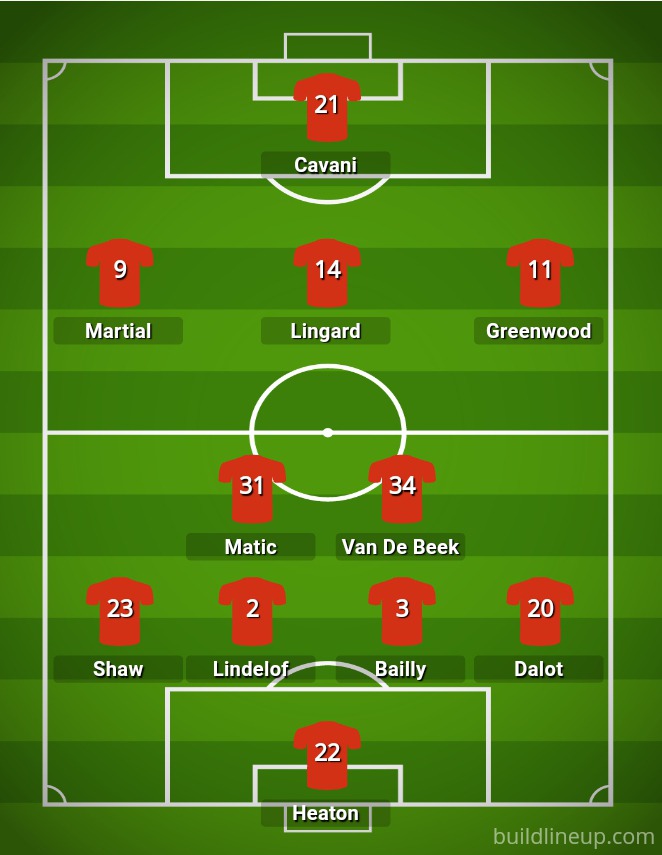