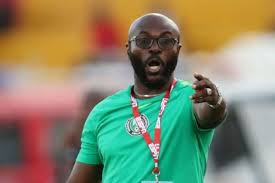 Abia Warriors coach Imama Amapakabo has declared his team resolve to challenge for the NPFL title in the upcoming season.

He said this on Wednesday while reacting to questions from the media, at the Okigwe Township Stadium After Abia Warriors defeated highly rated Aba based non-league side Uchecaria FC by a 5-1 scoreline.

"We lost a couple of players that I still wanted in my team during the off-season, so unfortunate but we still recruited new ones too part of the things I thought I will not be doing this season and most likely going back to them, watching this game I noticed about 23 points which I noted and i will be working on it but generally it's not so bad".

"Last season the league was on us when we were not ready and it really affected our performance. I believe this season we will ample time to train before the commencement of the season and games like this provide that kind of opportunity.

Speaking on the recruitment of some high-profile players like Kastan Igwe who arrived from Kazakhstan and Kalu Nweke former Kwara United vice captain coach Imama said, " They are pluses to the team and they come with lots of qualities but every coach has his own methodology and style of coaching and playing pattern and formation and tactics, some of them may find it difficult to adapt to some tactics but we are have them and will be looking forward to adapting them to our game".

Asked about his target this upcoming season he said " we are going to be having 20 league teams, Nigeria is not like other climes where you have a three, four or five horse races. every team have got a chance to win the title including Abia Warriors so we will be gunning for the league title so let the league begin" he ended up saying.