Anthony Joshua Staking A Lot In The Bout Against Usyk

Anthony Joshua's seemingly inexorable journey to being undisputed heavyweight champion of the world has gotten a little bumpy over the last two years.

First there was the loss to Andy Ruiz Jr. that no one saw coming at Madison Square Garden in June 2019, least of all Joshua after 22 straight wins to open his professional career.

Then came a pandemic that has limited Joshua - at his physical prime in his early 30s - to one fight since the start of 2020.

And most recently their is the issue of a legal ruling which scuppered the proposed Aug. 14 fight against Tyson Fury in Saudi Arabia that would have given one of the Britons every belt in boxing's marquee division.

That legacy defining fight against Tyson Fury is still on the card but it's endangered by an opponent Joshua must dispatch in the meantime to retain his WBA, IBF & WBO titles.

Oleksandr Usyk is the WBO mandatory challenger who arrived in London with an unbeaten professional record, a supreme technique and an eccentric personality ahead of Saturday's fight that's being televised by the DAZN streaming service and will be watched by 60,000 fans at Tottenham Hotspur Stadium.

A unified world cruiserweight champion-turned-heavyweight, Usyk is only the second southpaw Joshua has faced in eight years as a professional and comes armed with advice from compatriot Wladimir Klitschko - the last Ukrainian to hold a world heavyweight title before his loss to Joshua in 2017, also in London.

As far as replacement fight go, this is surely one of the most treacherous, even though Usyk has only fought once at heavyweight.

Both Joshua and Usyk Turned professional in 2013, both became world champion in 2016, though Usyk was in the cruiserweight division that he went on to unify in two years.

His step up to heavyweight has been underwhelming mainly because of the pandemic that has limited him to two under-the-radar fights - Chazz Witherspoon retired in the seventh round of a fight in Chicago in October 2019 and British slugger Derek Chisora was beaten on points a year later - but Usyk is a superstar in Ukraine and renowned for his footwork, movement and reflexes. 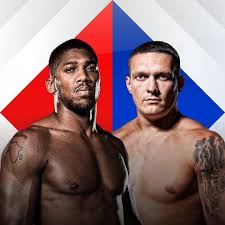