By Precious24 (self media writer) | 1 month ago

The Liberty Stadium in Ibadan is the first to be constructed in Nigeria and Africa in 1960.

It is an eyesore that the first stadium in Africa and Nigeria is the dilapidated Obafemi Awolowo Liberty Stadium Stadium Ibadan in Oyo State Nigeria. 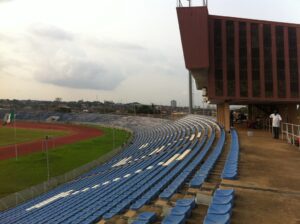 According to a report lately, the Liberty Stadium has said to be finally caught the attention of the Federal Government of Nigeria, the government has promised to begin repair works on the leaking roof of the facility as well as fixing the grasses of the main bowl of the stadium to restore it.

The Obafemi Awolowo Stadium located at Liberty road, Ring Road in Ibadan, Nigeria, was originally named the Liberty Stadium until 2010. The historic Liberty Stadium is a 35,000 seat football stadium. Ibadan is the capital and most populous city of Oyo State, in Nigeria. It is the third-largest city by population in Nigeria after Lagos and Kano.

Ibadan has a very rich cultural heritage and interesting history. Ibadan is the home of the first stadium and television station in Africa, the home of Nigeria’s first university, the University of Ibadan, and Nigeria’s first skyscraper, Cocoa House, which opened in 1965.

WHO BUILD THE FIRST STADIUM IN AFRICA?

It was named Liberty Stadium in honor of Nigeria’s independence and to begin a united Africa through sport. The complex was one of the several infrastructure and institutions that the Chief Obafemi Awolowo government established and programmed to take the region, and by extension Nigeria and the Black race to the pinnacle of global emancipation and development.

The Liberty Stadium located in Ibadan Nigeria is the first stadium in Africa and was constructed in 1960.

The Liberty Stadium shot the country into the world boxing fame in 1962 when it hosted the first world boxing title fight in Africa.

As at early 1960s, through the 70s and late 80s, the Liberty Stadium was ‘alive,’ fulfilling African objectives as centre of sports engagement, activity and development.

However, It is unfortunate to mention to you that the Liberty Stadium Ibadan which was once African pride has been ‘abandoned’ for reptiles and rodents. The Liberty Stadium and first stadium in Africa, which stood then as a pride of Africa, has since become an eyesore.