By Footballskits (self media writer) | 12 days ago

The Premier league is one of the best and most competitive league in the world. These are the top 8 goal scorers, playmakers and most clean sheet in the 21-22 season in premier league.

8. Reece James: James has been a great impact on Chelsea's title race. He has scored 4 goals this season.

7. Bruno Fernandes: Bruno has done well for Manchester United and he has made a great impact since he jin them. He has bagged in 4 goals this season with the most chances created.

6. Ismaïla Sarr: Sarr has been great after their promotion into Premier league. He is scored 5 goals this season.

5.Diogo Jota: Ever since Jota joined Liverpool from Wolves, he has been doing well. He has scored 5 goals.

4. Michail Antonio: Antonio has had a good time this season with 6 goals putting West ham in 4th position which has been a great start for them.

3. Jamie Vardy: Vardy has bagged 7 goals this season. Despite it they are 12th in the table.

2. Sadio Mane: Mane has had good and bad days and during those good days, he has scored up to 7 goals this season.

1. Mohamed Salah: Salah has done very well for Liverpool this season with 11 goals and putting them 3rd in the league table. 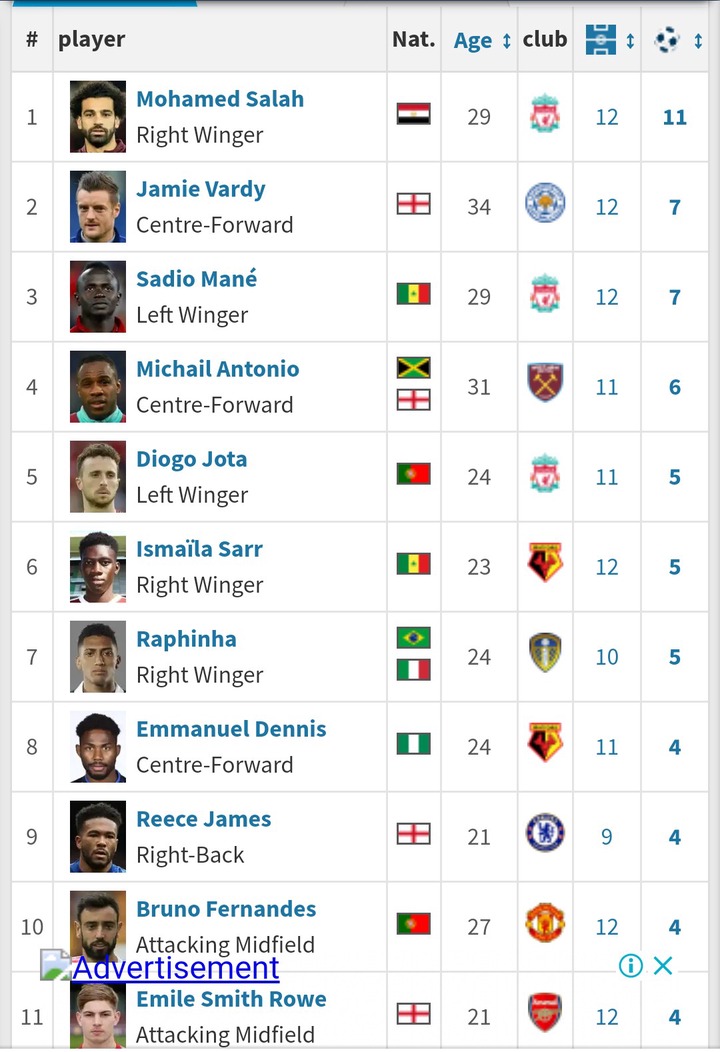 These are the top 7 playmakers this season

7. Reece James: James as mentioned earlier is making a huge impact on Chelsea by making 4 assists this season.

6. Emmanuel Dennis: The Nigerian has been a great impact in Watford ever since he joined the team. He has made

5 assists this season with 4 goals.

5. Gabriel Jesus: Jesus has made 5 assists this season and he has not been prolific this season.

4. Mateo Kovacic: Kovacic has made 5 assists and inow injured and still hods his 4th position as top playmaker.

3. Trent-Alexander Arnold: The English man has been working well on his delivery into the box and has made up to 6 assists this season.

2. Mohamed Salah: Salah as mentioned earlier has made 7 assists and is looking at winning both the golden Boot and playmaker award at the end of this season.

1. Paul Pogba: Pogba started well this season with 4 assists in his first match and 2 in his next two matches. Ever since, he has not made an assist since and is currently injured which he might recover in January. 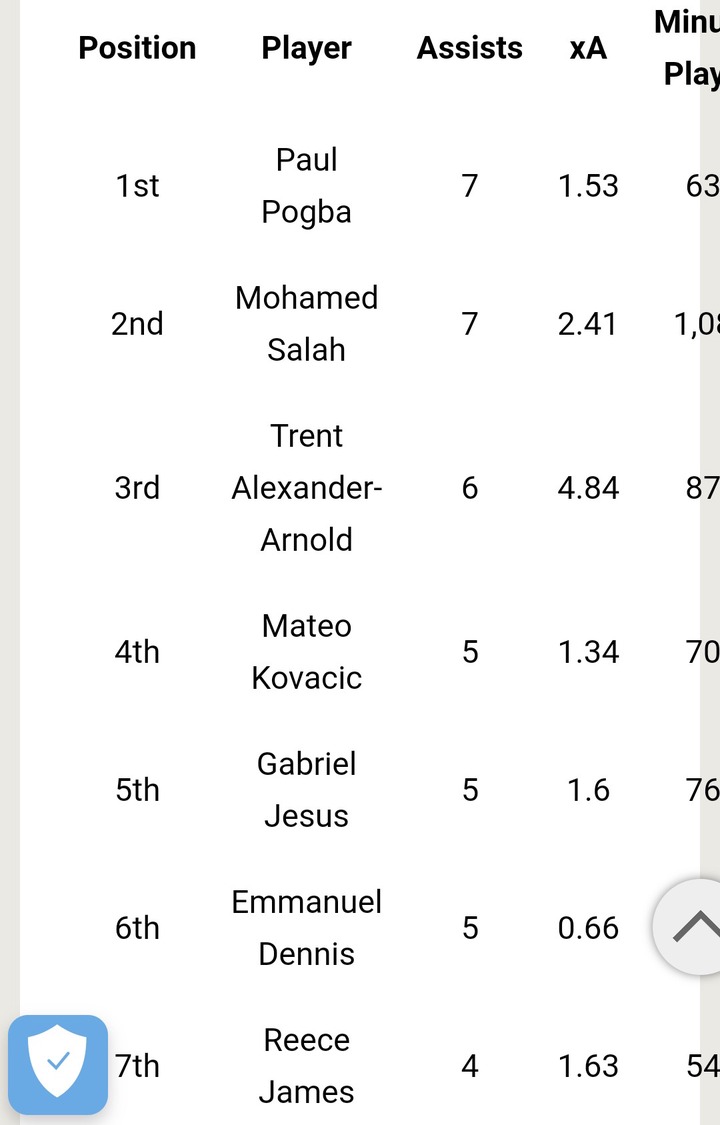 7. Emilano Martinez: The former Arsenal goalkeeper has had 4 clean sheets this season.

6. Robert Sanchez: Sanchez has gotten 4 clean sheets this season with a red card.

5. Alex McCarthy: The Southampton goalkeeper has made 5 clean sheets this season.

4. Aaron Ramsdale: The English man has made a great this season with5 clean sheets.

3. Allison Becker: Allison has also made a good start this season with 6 clean sheets.

1. Edouard Mendy: Mendy has been Chelsea's shot stopper since they signed him from Rennes. He had kept 7 clean sheets this season. 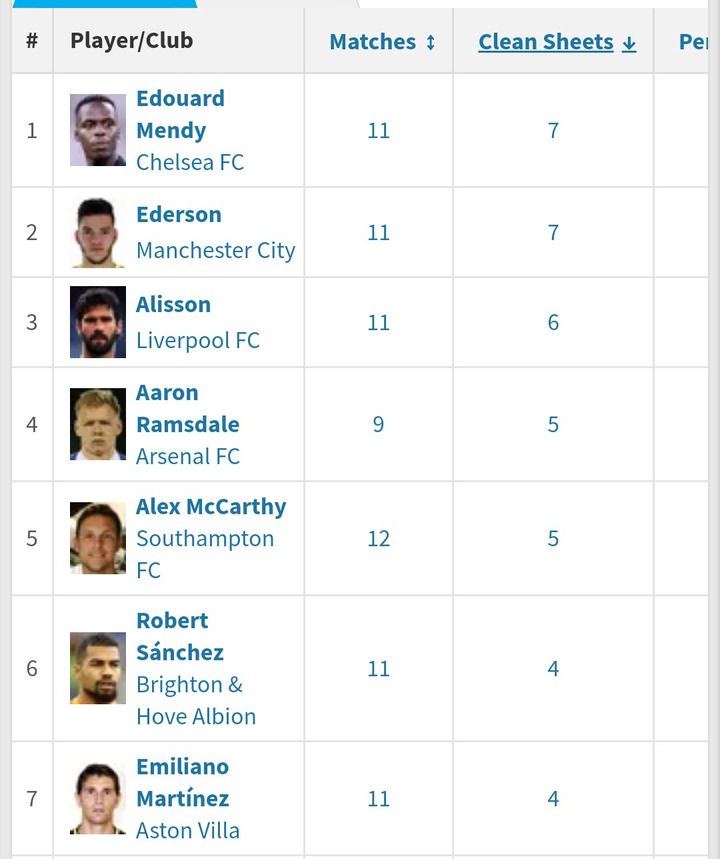 Through out the season we have seen so many huge signings by clubs with Jack grealish moving to Manchester City and Cristiano Ronaldo coming back to Manchester United. There have been up and downs in the league this season but this is how it looks. With Chelsea taking the top with 29 points. 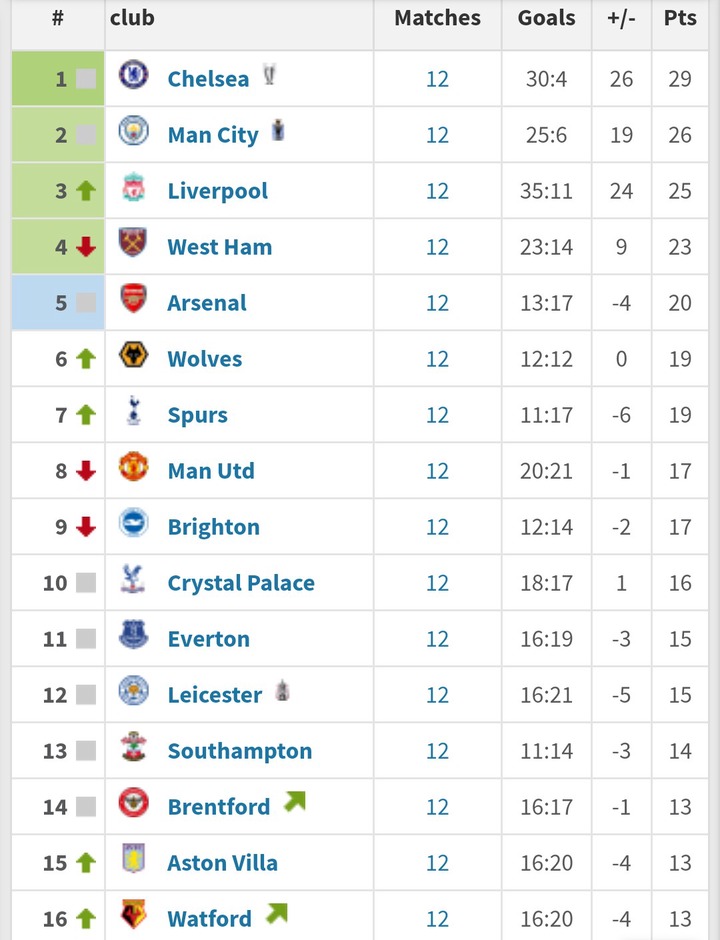 Content created and supplied by: Footballskits (via Opera News )