By Adeprecious (self media writer) | 2 years ago

Juventus and Lazio will meet on Monday at Allianz Stadium in Turin for a match of the 34th round in Serie A. Juve are on top of the standings with 77 points – six ahead of their closest challengers, while Lazio are down at 4th spot on 69 points. Juventus vs Lazio Head to Head

Worth mentioning: The teams of Lazio and Juventus have already met twice this season – once in the league and once in the Super Cup final and both finished in 3:1 victories for the capital side. No draw has been registered in the previous fourteen Head-to-head clashes.

The Eagles have been unable to keep a clean sheet in the last twenty encounters with Juve, while the “Old Lady” did not concede in twelve games. Three of the last five matches featured over 3 goals, and only the same also witnessed goals at both ends. Worth mentioning: Juventus finished in 3:3 draw with Sassoulo in their last outing on Wednesday. The team is on a run of two back-to-back draws and without a triumph in three matches. The “Old Lady” shipped in at least two goals in those games, after previously not conceding more than one in eleven consecutive meetings. All of Juve’s last five encounters produced over 4 goals and saw both involved sides to score.

Lazio and Udinese played out a goalless draw on Wednesday, with the Eagles winning their first point in four matches after being on a three game losing run previously. Lazio were unable to score more than a goal during their winless streak, with Ciro Immobile – the league’s leading goalscorer drawing blanks in three straight matches.

All but the most recent of Lazio’s last five meetings featured over 3 goals and three witnessed goals at both ends. 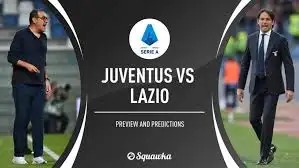