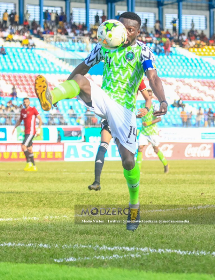 Okechukwu is teammates with the Brazilian at Turkish side Istanbul Basaksehir and spoke to Channels Television on Wednesday how he relates with the South American and how Okocha came into the picture.

"Watching Robinho on television as I did some years ago is different from playing with him as teammates. It's been fantastic playing with Robinho. "He (Robinho) told me he grew up liking Nigerian players like Jay-Jay Okocha and has learned a few things from his tricks and dribbles.

" When I came to the club, he told me: 'you're Jay-Jay's brother. We have been close since then," the defensive midfielder stated.

Robinho looked certain to join Chelsea and had his Chelsea jerseys even sold at the club's shop but he chose to sign for emerging giants Manchester City.

On his season long loan deal at the Turkish club from Egyptian side Pyramids FC, Azubuike said:

After the lockdown, I think I'll stay back at Basaksehir. I'm on a loan for a season with an option to buy so I don't think that I will go back to Egypt. We have spoken about it so after this pandemic things will be sorted out.

Azubuike further spoke on the Nigeria U-23 Eagles who failed to qualify for the football event of the now postponed Tokyo 2020 Olympics and his hopes to receive an invitation to the Super Eagles.

"Unlike the previous U-23 team that won bronze at the 2016 Olympics, we were not together in camp for long and that affected us.

" Talking about the Super Eagles, it's the dream of every player to play in the national team but I also realise that we have so many good players in my position like Wilfred Ndidi so I have to work very hard. Hopefully that will be enough to earn me an invitation to the Super Eagles," the midfielder concluded.