Arsenal and Chelsea will battle to lift the FA Cup at Wembley next month after they breezed past Manchester City and Manchester United, respectively, to secure their spot in the final.

Here, we take a look at the best rated XI from the two semi-final clashes, a team ultimately dominated by the Gunners...

The first of seven Arsenal players to feature in the FA Cup team of the round, Emiliano Martinez has impressed between the sticks after coming in for the injured Bernd Leno. The Argentine may have only been forced into making one save in the Gunners' 2-0 win over Manchester City, but a clean sheet in the semi-final sees him feature between the sticks with a WhoScored rating of 7.05.

Mikel Arteta has continued with a three-man defence, despite some criticisms of the system, yet it worked wonders on Saturday and it's an all-Arsenal backline in the team of the round. Kieran Tierney was dropped into defence from his usual wing-back position, with Sead Kolasinac dropping out of the XI, and with a WhoScored rating of 7.63, his inclusion is not undeserved. The Scot provided the assist for Pierre-Emerick Aubameyang and Arsenal's second in the victory, while seven clearances capped a fine showing from the summer arrival.

Shkodran Mustafi (7.53) may have been lambasted by supporters in the past, yet was solid on the right side of the three-man defence on Saturday as he dealt with any City attack down their left with ease. The German won two of three contested aerial duels, and was proactive in easing pressure on the Arsenal goal as he made eight clearances, three tackles and one interception prior to his late withdrawal.

Saving the best until last at the heart of the three-man defence, David Luiz made amends for a nightmare cameo against Manchester City in Arsenal's first game post-lockdown. The Brazilian was dire at the Etihad in their 3-0 loss last month, yet a WhoScored rating of 8.33 was enough to land the player of the round gong. Dominant in the air, Luiz boasted a 100% aerial success rate and made a whopping 11 clearances to ensure a clean sheet for the Gunners and a spot in the FA Cup final at City's expense.

Kevin De Bruyne is the only player from the two losing sides that makes the team of the round. The Belgian may have been unable to haul City to the FA Cup final, yet it wasn't for want of trying on De Bruyne's part. He created nine goalscoring chances in City's loss, more than Arsenal and Manchester United made combined (8), while five tackles and four interceptions contributed towards the 29-year-old's inclusion in this XI with a WhoScored rating of 7.79.

Partnering De Bruyne in the middle of the park is Arsenal loanee Dani Ceballos. The Spaniard wasn't dribbled past during his 88 minutes on the pitch, with all four attempted tackles proving successful, while an additional three interceptions reinforced a WhoScored strength of 'defensive contribution' and saw Ceballos yield a WhoScored rating of 7.69. 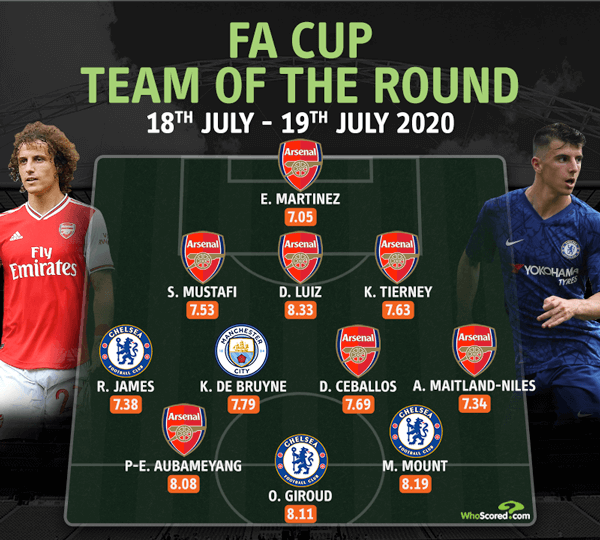 A surprise inclusion at left wing-back in the Arsenal starting XI was Ainsley Maitland-Niles, who was making just his second start since football returned last month. However, he repaid the faith shown in him by Arteta with a solid showing out of position against City as he protected Tierney with ease, making five clearances and two tackles. He got forward well, too, as he made three dribbles to return a WhoScored rating of 7.34.

Rounding off the midfield is the first of three Chelsea representatives in the form of Reece James. The youngster was tasked with attacking Manchester United youngster Brandon Williams down the Blues' right flank and did so impressively as his WhoScored rating (7.38) suggests. James completed three dribbles, while his work off the ball also shone through as he made two tackles and two interceptions to cap a fine showing on Sunday.

The final Arsenal representative is Pierre-Emerick Aubameyang, whose brace helped the Gabon international to a WhoScored rating of 8.08. Aubameyang had previously struggled against City, but came up clutch in Saturday's semi-final. Indeed, the 31-year-old hit the back of the net with two of three shots in the 2-0 victory over City to help Arsenal to the FA Cup final as they seek to lift the trophy for the 14th time.

On the opposite flank, Mason Mount put in a man of the match performance in Chelsea's 3-1 win over Manchester United, scoring what proved to be a decisive second shortly after the break, albeit with a huge slice of fortune from David De Gea. The England international was solid in possession as he returned a 92.3% pass success rate, while three dribbles, one tackle and one interception saw the 21-year-old collect the man of the match award on Sunday.

Spearheading the attack in this XI is Olivier Giroud, who netted his 16th FA Cup goal of his career to open the scoring in Chelsea's eventual 3-1 win over Manchester United. Giroud has never lost an FA Cup match he has scored in, having found the back of the net in 12 games in the competition, with his goal coming from one of three shots. The Frenchman was a real handful for the United backline, too, as he won six aerial duels to make this team with a WhoScored rating of 8.11.