Manchester United Heist All Three Points From The Anex Stadium

By Charleshakimi (self media writer) | 1 year ago 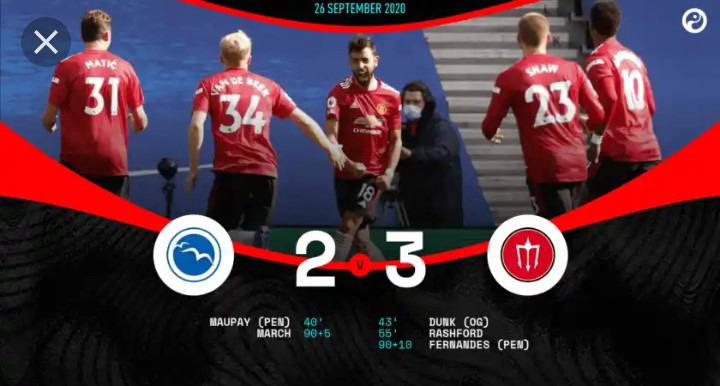 It was an interesting encounter between Manchester United and Brighton, one that all football fans would have loved to set thier eyes on. It all happened this afternoon at the Anex, with another controversy recorded in the English Premier League, as Manchester United stole all three points from outstanding Brighton side.

Manchester United travelled to the Anex this afternoon, for their second match of the season after losing at home to Crystal Palace. Manchester United got all three points to record their first win in the 2020/2021 season, but it happened in a shocking way, as a penalty was awarded after the final whistle was blown.

Brighton played wonderful football, hitting the woodwork five times, as they also out played their visitors. After their lose, Brighton boss described the result as a 'cruel blow'.

Maupay opened the scoring for Brighton after converting a penalty in the 40th minute. 3 minutes later, an own goal by Dunk cancelled their lead. In the 55th minute Rashford made it two to hand United a lead. However Sony Match scored a late equaliser to give Brighton a hope of getting at least a point.

The moment when it all seemed to be over, as the final whistle was already blown, the referee was called to check the VAR monitor, and he awarded the match second penalty that was converted by Bruno Fernandes, as Manchester United managed to carve out a win.