By OGswillas (self media writer) | 1 year ago

Tilburg-born Nigerian winger Joel Ideho has finally made his competitive debut for an Arsenal team and it came against Blackburn Rovers in a Premier League 2 clash at The County Ground in Lancashire on Friday night,

The Gunners confirmed the signing of the former Ajax Amsterdam wonderkid a day after the close of the summer transfer window but he only started training with their youth team on October 26.

Ideho was included in the matchday squad against Liverpool last Friday but was unable to enjoy any playing time.

With ten minutes left, manager Steve Bould handed him his debut by bringing him on to replace the impressive Folarin Balogun.

Other players of Nigerian descent on parade for the Gunners include Joseph Olowu, who has returned to the Emirates Stadium after a loan spell at Cork City, 2004-born center back Zach Awe and midfielder Tim Akinola.

After a poor start to the season, Arsenal sent a message to their rivals by thrashing Blackburn Rovers 6-0 courtesy of goals from Moller (2), Cîrjan, Smith Rowe (2) and Pike (OG). 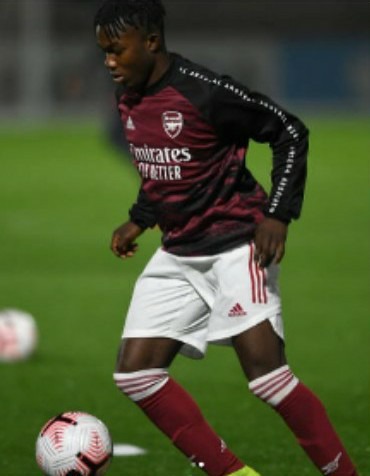 Content created and supplied by: OGswillas (via Opera News )