Most of the top European clubs are currently in their Pre-Season tour ahead of the upcoming season. Most of their new signings are already integrating into their playing style. Manchester united who have secured two victories against Liverpool and Melbourne victory, have a very tough Friendly games against Atletico Madrid in Oslo, Norway on 30th July. In the same date, Real Madrid will play against Juventus at San Francisco, United States, while Roma will face Tottenham at Haifa, Israel. These three big fixtures are just Pre-Season games but most of these clubs will field their strongest side in other to test their squad strength. 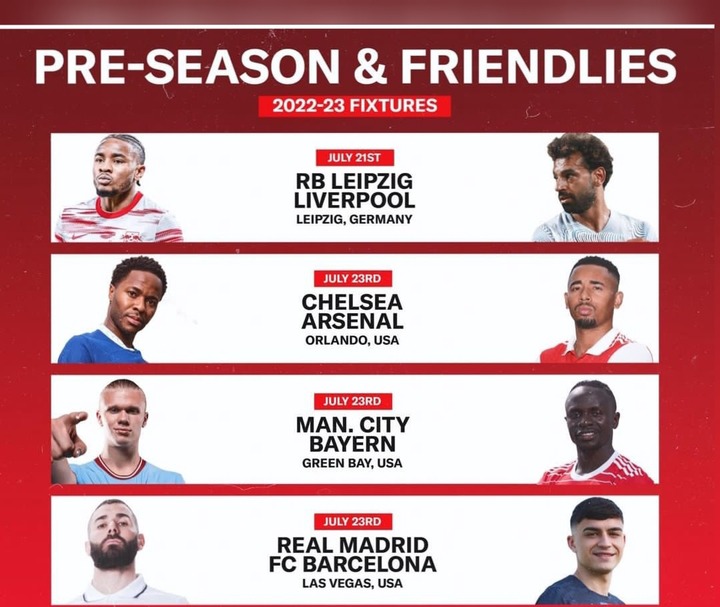 Liverpool who lost 4-0 to Manchester united in their first Pre-Season game and beat Crystal Palace in their second, will play against RB Leipzig in Germany. The Meseryside reds are looking forward to helping Darwin Nunez to integrate into the Playing style of the club. The Uruguayan striker who joined Klopp's side this summer is yet to score his first goal in the Pre-Season. However, Gabriel Jesus who joined Arsenal this summer, has scored three goals in Arsenal's first two Pre-Season games. 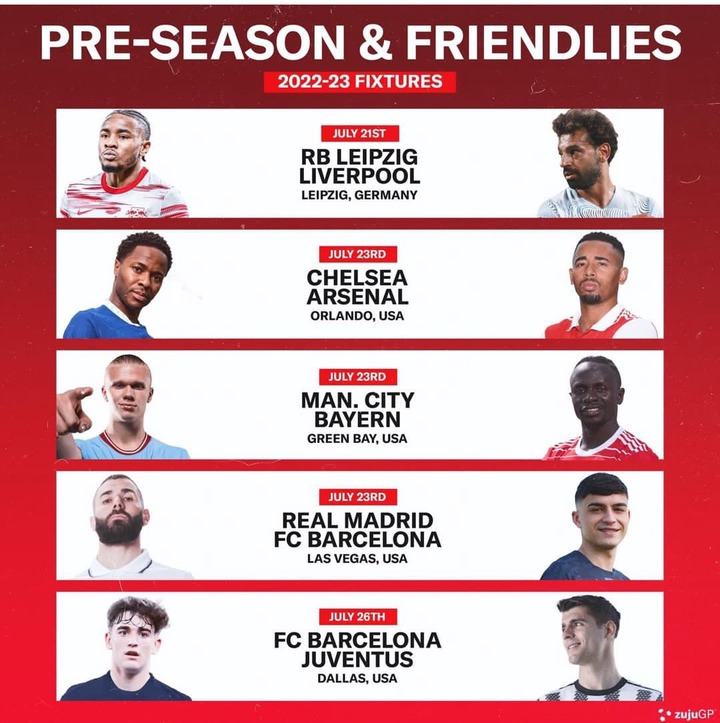 Gabriel Jesus will also participate in Arsenal's upcoming Pre-Season game against Chelsea in Orlando, United States on July 23rd. This will be Arsenal's biggest game in the 2022 Pre-Season fixtures and will be looking forward to beating Chelsea who won their first Pre-Season game last night. On the same day, Manchester city will playing against Bayern Munich who recently sold their key Striker Lewandowski this summer. Pep Guardiola's team will be playing the German Champions at Green Bay, United States, while Real Madrid will take on Barcelona at Las Vegas, United States.

The Los Blancos will be seeking retribution against the Catalans who thrashed them in their last meeting. However, Barcelona have fortified their squad this summer and could cause more misery to Carlo Ancelotti's men. However, after this fixture, Barcelona will take on Juventus at Dallas, United States on July 26th. However, on August 24th, Barcelona will play a friendly game against Manchester city at Camp Nou.