World most expensive defender puts his team to shame when it matters most.

World most expensive defender puts his team to shame when it matters most.

Chelsea FC defeated Manchester United 3 - 1 in a crucial FA Cup semi final match on the Sunday night. The Blues have suffered three losses to Manchester United earlier this season, but avenge themself to make it to the FA cup final round. 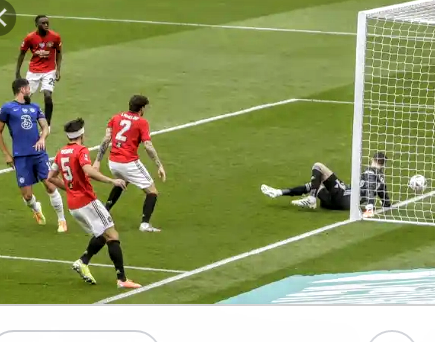 The match was officiated by referee Mike Dean, with both teams starting strongly in the game. Some chances were created; Bruno Fernandes of Manchester United swings in the corner from the left in the 32nd minutes of the game. But Nemanja Matic failed to convert it, after a miskick from a promising position. The Blues also made a good effort in the 33rd minutes of the game by Mason Mount. He directed a shot on target, but De Gea saved it.

The deadlock was finally broken in 5 minutes additional time to the first half. Cesar Azpilicueta of Chelsea puts in a great cross, which Olivier Giroud converted.

Mason Mount added another goal in a minute into the second half, as he takes the ball forward and fires into the net from outside the box.

Marcos Alonso directs a ball squarely in the box. The world most expensive defender; Harry Maguire of Manchester United holds his head in his hands, as he puts the ball past his own goalkeeper in the 74th minutes of the game. What an own goal in a crucial match and the mistake kills the moral of the his fellow team mates in the game.

Manchester United got a consolation goal in the 84th minutes, as Callum Hudson Odoi of Chelsea conceded a penalty for tripping Anthony Martial. Bruno Fernandes took the penalty and puts the ball into the net.

Content created and supplied by: Crown371 (via Opera News )