Bobby Lashley is currently enjoying one of his best runs in WWE as a member of The Hurt Business. The villainous faction led by MVP has not only helped in revitalizing the career of The All Mighty but has also given a new direction for its other two members, Shelton Benjamin and Cedric Alexander.

Since its inception, The Hurt Business has been generally well-received by the WWE Universe and critics alike. 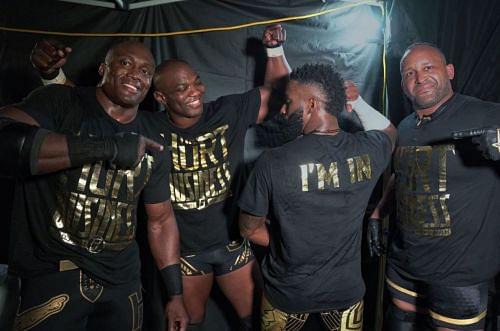 Bobby Lashley reveals why The Hurt Business was formed

This marks the second time that Bobby Lashley formed an alliance with MVP after the duo's heel stable in IMPACT Wrestling which was known as The Beat Down Clan. In a recent episode of WWE's After The Bell podcast, Bobby Lashley revealed to Corey Graves how The Hurt Business was similar to their group in IMPACT Wrestling and the reason why they formed The Hurt Business in WWE.

"It's incredible because I think that the group that we have, it's real. When MVP first came back, MVP had told me this - he was like, 'when I first came back, it was really just to have that one match for my son' because he had a son and his son didn't see him wrestle before. He was like, 'I really want my son to be able to see me wrestle live, under the lights, and everything like that,' and he wasn't thinking about coming back full time. But when he came back, he and I ate, and he was like, 'man, me and MVP did something before.' And I was like, 'man, we gotta run that back."

and MVP, and Shelton, we're kind of all in the same boat, and when we first got together, we were eating dinner every night. We were just all talking about putting this thing together, and The Hurt Business is basically guys that.... that kind of 'tough man' era coming back today to kind push what we have on some of these younger guys. But at the same time, we understand the business, and understanding the business is we're going to beat you down and we're going to be the bullies." (H/T:  Wrestling Inc)

Bobby Lashley added that he was going to do the same thing that veterans like Booker T, Finlay, JBL, Umaga, and even Vince McMahon did for him, i.e. beat down a lot of people while telling a story inside the ring. He said that at the end of the day the babyfaces will be getting 'over'.

Currently, The Hurt Business is engaged in a feud with another similar heel faction - RETRIBUTION, whose leader was recently revealed to be Mustafa Ali. Bobby Lashley was drafted to RAW in the recent WWE Draft along with The Hurt Business. It will be interesting to see how their feud plays out.

Will Ali target Bobby Lashley's United States Championship next? We will have to wait and see.