Kai Havertz choose Chelsea ahead of other European teams

Frank Lampard is looking to bolster his squad ahead of next season. 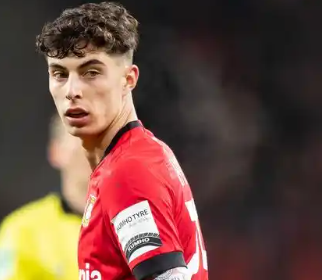 Chelsea and other host of top European teams such as Real Madrid and Barcelona are interested in a move for Bayern Leverkusen star Kai Havertz. The youngster has emerged to be a top transfer target for Chelsea following an impressive performance in the just concluded Bundesliga Season.

Chelsea though has completed the signing of Timo Werner and Hakim Ziyech from Red Bull Leipzig and Ajax respectively but are still looking to bolster their attack in other to be able to contest with Super powers such as Manchester City and Liverpool for the top flight league next season.

Report has emerged that Kai Havertz will choose the transfer to Chelsea ahead of other European top teams wholeheartedly and his club, Bayern Leverkusen have reportedly agreed with him.

The deal might go through if Chelsea are able to negotiate with the German side and a deal is agreed between two club as well and Chelsea and the player.

Havertz arrival might be the beginning of something interesting at the Stamford Bridge. But the blues will be looking to pay on high if they are to sign Havertz. And the club will be considering the effect of Coronavirus on their team finance given that they have already signed two attackers which might make them not want to pull the deal through.

Content created and supplied by: Worldbest295 (via Opera News )