By beautification (self media writer) | 2 years ago The Argentine forward superstar, Lionel Messi has shown his dissatisfaction concerning his club's performance. The skillful football player who plays from Barcelona, has told his teammates after they lost againagainst Osasuna-which granted Real Madrid Laliga Trophy- why the club needs to stand on its feet and work really hard to return to its first glory.

According to Messi, the performance of the club, Barcelona, throughout the season has been very erratic, weak and with low intensity. He said the club's defeat against Osasuna was just the summary of season. 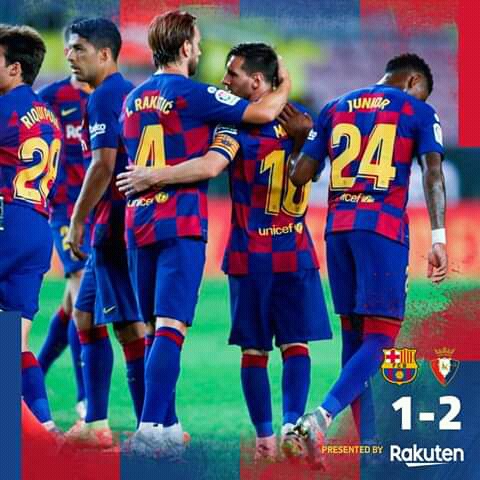 The superstar, Lionel Messi, however scored a dazzling free kick in the match against Osasuna last night, but that wasn't enough to push the club ahead in the fight for the trophy.

And now, Real Madrid has claimed the cup after a win against Villarreal. Lionel Messi, after losing out in the race of Laliga cup, tried to encourage his teammates to work hard in order to win champions league. He said; "We can't look at Madrid. Madrid have done their job, but we have helped them a lot. If we want to win the Champions league, we have to change a lot. If we continue like this, we will lose the game against Napoli."

The word-best-player Lionel Messi, also gave a sound iteration of what to do to his teammates. He said the club has to be self-critical.

"Stating from the players but doing a global self-criticism. We are Barca and we have to win everything."

Messi wants to club to work towards the fans expectations- winning trophies - and also be hardworking in the forthcoming games. He said the club still has a lot to change, but without changes, the club might lose the game against Napoli, in Champions league quatre - final.