Before Roman Reigns became known by his current name, he performed as Leakee and then Roman Leakee in WWE’s Florida Championship Wrestling (FCW) and NXT developmental systems.

Roman Reigns’ fortunes picked up, to say the least, when he joined WWE’s main roster in November 2012. The Big Dog worked alongside Dean Ambrose and Seth Rollins as part of The Shield, before going on to become one of the top WWE singles Superstars of his generation.

Along the way, Roman Reigns has crossed paths with many of the same people who he shared the ring with back in his FCW and NXT days. However, only a select few have been able to defeat the former Shield member in both developmental and in WWE.

In this article, let’s take a look at four WWE Superstars who defeated Roman Leakee and Roman Reigns, as well as 13 who lost to both of The Big Dog's personas.

Disclaimer: Roman Reigns switched back and forth between the names Leakee and Roman Leakee. For the avoidance of doubt, any references to Roman Leakee in this article may also refer to times when he was simply known as Leakee.

When did Cesaro defeat Roman Reigns?

Cesaro’s one and only victory over Roman Reigns came in February 2018. The Swiss Cyborg teamed with Sheamus to defeat The Big Dog and Seth Rollins in a WWE RAW Tag Team Championship match on RAW.

Roman Reigns looked on course to win the titles with his Shield ally, but Jason Jordan caused a disqualification after getting involved in an altercation with Cesaro and Sheamus at ringside.

When did Cesaro defeat Roman Leakee?

Many WWE Superstars spend several years in the company’s development system before appearing on RAW and/or SmackDown. In Cesaro’s case, he only spent seven months in FCW before debuting on WWE’s main roster in April 2012.

During his brief time in FCW, Cesaro defeated Roman Leakee in November 2011 in a one-on-one match that lasted just three minutes and 55 seconds.

Big E has recorded several live event victories against Roman Reigns over the years. Most notably, when he joined forces with Cody Rhodes and Goldust to defeat The Shield during WWE’s European tour in November 2013.

As for their televised encounters, Big E has defeated Roman Reigns on five occasions in front of WWE’s cameras.

That might sound impressive, given that Roman Reigns is known to win many of his matches, but all five of Big E's victories came in tag team matches.

Like Cesaro, the New Day member has not yet defeated Roman Reigns in a one-on-one match on WWE's main roster.

The first of Big E’s three victories over Roman Leakee came in September 2010. He teamed with Bobby Dutch and Conrad Tanner to defeat Cable Jones, Fahd Rakman and Leakee in an FCW dark match.

Big E then picked up another victory over Leakee when he won a Fatal Four-Way match, also involving Kassius Ohno and Leo Kruger, at an NXT live event in August 2012.

In one of those strange WWE quirks, Roman Reigns pinned Titus O’Neil in a tag team elimination match on RAW in September 2013. However, according to the record books, O’Neil still walked away with the win that night.

The match saw all three members of The Shield battle it out against 11 WWE Superstars in an 11-on-3 handicap elimination match.

Roman Reigns eliminated O’Neil in the early stages of the chaotic encounter, but O’Neil’s team ended up picking up the victory after Daniel Bryan pinned Seth Rollins at the finish.

The two men never crossed paths in singles action in FCW, but they did team up together on two occasions during their time in the developmental territory.

Leakee and O’Neil defeated Sandow and Lucky Cannon in April 2011. They were also victorious against Erick Rowan and James Bronson in another match three months later.

The Eater of Worlds has picked up several victories over Roman Reigns since then, including in a singles match at Battleground 2015.

Before Bray Wyatt rejuvenated his career as the leader of The Wyatt Family, he performed as Husky Harris in FCW and as a member of The Nexus on WWE’s main roster.

Roman Reigns/Roman Leakee and Bray Wyatt/Husky Harris did not go one-on-one until they met several years later on RAW.

1 All 13 Superstars who Roman Reigns and Roman Leakee defeated 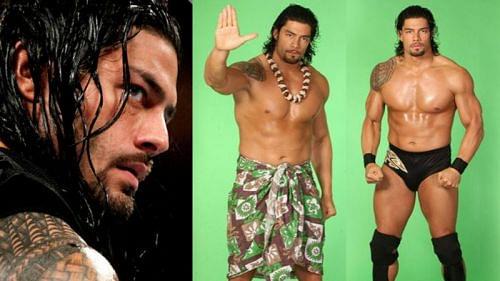 Nowadays, it is rare for Roman Reigns to lose via pinfall or submission. Back in 2010, however, it was a very different story.

As he began to hone his craft and work his way up the FCW card, Leakee picked up singles victories over the likes of Jey Uso and Dean Ambrose. He also recorded wins over future main-roster rivals Erick Rowan and Rusev in tag team matches.

With the exception of CJ Parker (better known as Juice Robinson), the 13 Superstars below suffered losses against Roman Leakee in FCW and against Roman Reigns in WWE.

Parker, in contrast, lost one match against Roman Leakee at an NXT live event in August 2012. Then, after The Big Dog’s name changed to Roman Reigns, Parker lost against him on another four occasions at NXT shows in September 2012.