'If we continue like this, we'll lose to Napoli' - See what Messi said after Barca lost to Osasuna 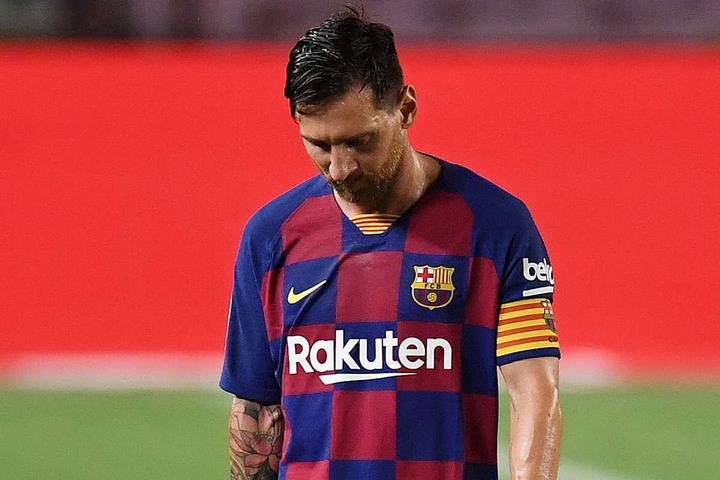 Messi was very unhappy as their loss to 10-man Osasuna on Thursday confirmed they have tamely surrendered their title to Real Madrid.

He was also not happy with the overall performance of this current Barca team throughout this season as he called them "a very erratic, very weak, low-intensity team" he also said "if we continue like this, we'll lose to Napoli".

You maybe wondering why Messi would be so critical of the Barca team, here is how it came to that.

As football returned in June Barcelona were leading Real Madrid on the standings by 2 points, but they failed to match Real Madrid's 9 game winning run since after the break as they drew against Sevilla, Celta Vigo and Atletico Madrid to surrender that lead to Real Madrid.

Coming into the game against Osasuna, the Barca players knew they were 4 points behind, and only a win and a favourable result from Madrid's game will keep their hopes of retaining the La Liga title alive.

As the game progressed nothing that happened went in their favour, Osasuna took an early lead to the half-time break while Madrid were leading Villarreal 1-0 at half-time.

Messi wanted it but his teammates were clearly not up for the fight, he scored from a direct free kick at the start of the second half to level the scoreline.

Later in that half, Osasuna saw red, just before the 80th minute mark. But this didn't help as Barca still conceded a second goal deep into stoppage time to lose the game 2-1.

In the Alfredo Di Stefano stadium, Madrid made it 2-0 in the second half after Benzema converted a penalty kick won by Sergio Ramos. The game ended 2-1 with Villarreal scoring a late consolation goal.

Messi and his teammates may not have heard the result from the Madrid game at the time, but it didn't matter as their failure to win means Real Madrid are champions, they knew this. After yet another weak performance from his teammates this season, Messi had some strong words for them in a post match interview with movistar +, he said: "We didn't want to end the season like this but it represents how the season has gone.

"We were a very erratic, very weak, low-intensity team... we lost a lot of points and today's game is a summary of the season.

"We have to be self-critical. Starting from the players but doing a global self-criticism. We are Barca and we have to win everything. We can't look at Madrid... Madrid have done their job, but we have helped them a lot.

"If we want to win Champions League, we have to change a lot. If we continue like this, we'll lose the game against Napoli.

"January until now has been such a terrible time for everybody. I think in the Champions League there are four matches where we could turn the whole season around if we get the right results.

"I think the people here at the club will feel angry about what's been going on this season but that's normal, the players feel that too. It's logical people will be critical. I think it's like losing against Roma and Liverpool, when you don't win anything no one is happy."

Messi clearly annoyed and frustrated with the Barca team in that interview.

As messi said, Barca still have the Champions League to play for this season but it will take a change in performance and a newly found togetherness from the Barca team if they are to achieve anything in that competition.

Getting passed Napoli may be achievable but then a meeting with Bayern Munich follows, unless Chelsea perform some kind of miracle and eliminates Bayern after being 3-0 down from the first leg in February.

The Barcelona family which includes the club president, the board, the first team manager, the players and then the fans must have to unite, the Barca family must settle their internal differences before the start of next season if they are to have any hope of winning back their La Liga title from Real Madrid.

This season there has been a lot of internal issues between the board and the players and even between the players themselves. All that must have to end, signing new players will not solve the problem, they will come and become part of this big misunderstanding that has run deep in Barcelona.

What do you think about what Messi said regarding the Barca team? Secondly, do you feel it is possible that Barca would be able to win the Champions League this season based on what we have seen so far?