Messi: "If we do not react, we will not beat Napoli" 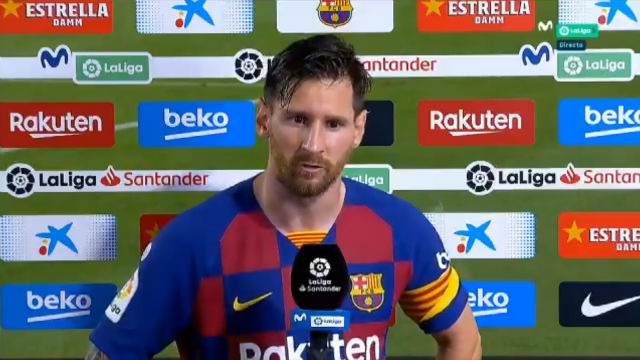 At the end of Barça-Osasuna (1-2) in which the team buried their title options, it was the captain of FC Barcelona, Leo Messi , who attended the Movistar La Liga microphones; and he did it to intone a hard and self-critical speech; apologizing to the fans, taking blame and almost demanding that the team react and change to have options in the Champions League against Naples.

Rosario's genius, delighted with the defeat and loss of the League title, admitted that "we did not expect ... we did not want to finish the League in this way, but it marks a bit like it was all year. We were an irregular, weak team They beat us by intensity and they score an easy goal. We lost many points where we shouldn't have. "

The Barça captain did not want to detract from Real Madrid as champion, although he also said that they had not competed well. "They are both. Real Madrid did their thing ; after the break so far they have not lost and that has a lot of merit, but we help a lot so that they take the League with them. We have to do self-criticism , starting with the players."

Messi's message was clear when clarifying, when they commented on the controversies and debates on arbitration and other issues that must be "a global criticism, but we are Barcelona and we must win all the matches, whatever it is and not watch the rival. "

Regarding his serious gesture in the free kick, Leo explained that it was "a little because he did not enter, and the feeling that the team tries and cannot, that leaves much to be desired in many games and I think that in the first Some of us were beaten and we left the rival a lot. In the second we reacted, it seems that we need to score a goal to react, "he lamented.

NOTICE ABOUT THE CHAMPIONS

In this sense, he concluded that now "we can use the break to clean our heads and rest, to think that in the Champions we start from scratch and that there are four games that can give you the title we all want. But for that, we must change a lot and do a lot of self-criticism and not think that we lost because of the referees "

HE APOLOGIZED WITH THE HOBBY