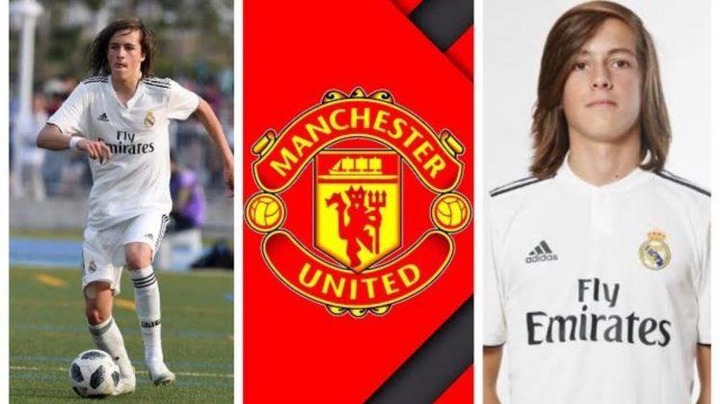 Alvaro Fernandez Carreras is a 17-year-old Spanish international player, who was born in Mallorca, Spain, on 3rd March 2003.

The youngster began his formative years as a footballer at Racing de Ferrol from 2007 – 2012, before moving to Deportivo de La Coruna between 2012 – 2017. With his obvious talent being shown at Deportivo, Carreras was scouted by Real Madrid on numerous occasions and later joined their developmental youth rank in 2017.

Since joining Real Madrid in 2017, the talented youngster has played in their Under-15, Under-16 and Under-17 levels. Carreras was among the talented group of players that were noted being highly rated in Real Madrid’s academy together with Bruno Iglesias (midfielder) and Israel Salazar (forward). The teenager is well-known as an attacking fullback with impressive pace and physique.

Just like his idol (Marcelo), Carreras plays as left back. He’s a quality defender, who is good with the ball at his feet and can take the ball from behind with bursting runs. His technicality and intelligence on the ball standout among his peers. No wonder he’s difficult to beat one on one.

Considering the difficulty in earning a first team spot with Real Madrid, Alvaro Fernandez has decided to take an easier route which will ensure his early consideration for first team action. The teenager has now agreed to join Manchester United on a four-year contract.

After refusing to extend his contract with Los Merengues, the youngster left the club as a free agent saving a move to Manchester United ahead of 2020/2021 season.

Though United has Luke Shaw who is 25-years-old and Brandon Williams who turns 20 in September, competing for the left-back position, the chance to sign the highly rated Carreras was too tempting of an opportunity to let go. The youngster is seen as a future prospect by Red Devils’ bosses.

Upon arriving at Old Trafford, Carreras is expected to join the Red Devils’ reserves side next season, coupled with the avenue of training with the first team seldomly. An opportunity which many youngsters have grabbed with both hands, such like the cases of Marcus Rashford, Williams, Scott McTominay and the likes. Upon the completion of his move to Manchester United, Alvaro took to his Instagram page on Thursday afternoon, appreciating the club.

The fullback stated: “It was not an easy decision and I only have words of thanks, after having belonged to the White House these past 3 years, I have made the decision to leave this great club.

“I wanted to thank all my teammates, and the entire coaching staff Real Madrid, for making me a better person and footballer, it has been a real pleasure to wear this shirt, and represent this shield, it is time to say forever and take another path in my football career, take a step forward towards my dream, thank you Real Madrid!”

With United’s signing of Alvaro Fernandez, it’s obvious that United are already planning for the future. But the certainty that this young talented teenagers will live up to expectation, makes this signing a big gamble which might either favour United or turn out to be a shamble.