By Daduke (self meida writer) | 1 months 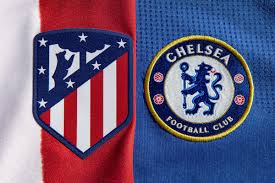 the London side, Chelsea share some history between them. Most notably would be their champions league experiences.

Moreso, a host of top players have moved between the London based side and the Spanish team.

We take a look at six top players that have played for both teams at different points in their career.

The Uruguayan striker in the 2015/16 season signed for Chelsea on a one year loan deal where he made very few appearances for the blues and unfortunately not winning any trophy in the process. He plied his trade for Atletico Madrid between 2011 and 2013 at the peak of his career where he won two major honors with them.

Brazilian left back, Filipe Luis comes next on the list. Starting his journey between the two clubs at the Spanish capital with Atletico in 2010, he move to Chelsea in 2014 where he spent just one season and returned to the Spanish side. During his time between both teams, he won eight trophies in the process- 6 with Atletico and 2 with Chelsea.

In the summer of 2017, Chelsea broke their club record to sign Alvaro Morata who was seen as a replacement for Diego Costa, a transfer that would later yield very little.

The Spanish international was later sent out on loan to Atletico Madrid in the 2019/20 season.

He won two trophies between the two clubs, with all being with Chelsea.

One of Chelsea's biggest goalkeepers, Courtois is next on the list. As a Chelsea player, he stayed on loan at Atletico Madrid between 2011 and 2014 before moving back to parent club where he spent an illustrious four years with the blues, taking the number spot in the process.

The Belgian shot stopper has won eight trophies between the two teams- four for each side.

The Spanish giant might have made his mark during his time at Liverpool but he also played for Atletico Madrid between 2001- 2007 where he started his career and for Chelsea between 2011- 2015 before returning back to Atletico between 2015- 2018 winning Four trophies between both clubs including the Champions League at Chelsea.(Chelsea- 3 Atletico- 1).

Unarguably one of the most prolific strikers to play for both teams, Diego Costa has played for Atletico Madrid for three different times in his career, between 2007-2009, 2010-2014 and 2018-2020. He played for Chelsea between 2014-2017 where he turned out to be one of the most deadliest strikers in the Premier League at the time. He won nine trophies between the two teams- six with Atletico and 3 with Chelsea.

Content created and supplied by: Daduke (via Opera News )