This week’s episode of SmackDown once again delivered an entertaining episode. The show kickstarted with a special segment featuring Roman Reigns. The WWE Universal Champion was set to be declared as the Tribal Chief, but he denied the honour. The Champion felt that he can’t be called by that title unless Jey Uso shows him more respect.

The show also saw the return of Kevin Owens to SmackDown as a part of brand-to-brand invitation. The WWE Superstar hosted the KO Show and welcomed Alex Bliss as his guest. But Owens got more than we had bargained for and ended up being involved in a rather unpleasant encounter. In addition to that, we also saw The Lucha House party members further involve in an altercation after Matt Riddle replaced Kalisto in a match against Shinsuke Nakamura, Cesaro, and King Corbin.

In this article, we will take a look at WWE Superstars who impressed us on tonight’s episode of SmackDown and those who didn’t. So, without further ado, let’s begin.

Roman Reigns’ heel turn gave the entire WWE Universe everything that they have wanted to see for years now. But it also brought something that no one expected – the rise of Jey Uso. This week’s episode of SmackDown confirmed that the ongoing feud between Jey Uso and his cousin Roman Reigns would continue on SmackDown.

Both Superstars came face to face once again on SmackDown tonight. Reigns was set to be crowned as the Tribal Chief, but he refused because ‘he’ wouldn’t acknowledge him as the head of the family. Hence, Reigns proposed another title match at Hell in a Cell in which he will put his WWE Universal Championship on the line against Jey Uso.

ring, AJ Styles walked out and told Jey Uso that he would always be on the sidelines. The latter didn’t like those words and immediately attacked Styles. Both Superstars locked horns in an incredible match that saw both men look equally good inside the ring. One of the epic spots in the match saw Jey Uso hit AJ Styles with a clothesline on top of the rope while the latter was trying to attempt a Phenomenal Forearm.

After an entertaining back and forth, Jey Uso finally managed to pick a much-deserved victory over The Phenomenal One. As was confirmed on SmackDown, Jey Uso will challenge Roman Reigns for the title once again at the pay-per-view later this month. However, as of now, the only details revealed about this match suggest that the stakes will be ‘incredibly high’.

Once upon a time, Shorty G was billed as the next Kurt Angle in WWE. Now, he gets squashed in less than two minutes. This WWE Superstar was subjected to a brutal fate tonight on SmackDown when he faced Sheamus in a singles match. The Celtic Warrior picked an easy win over Shorty G, and to say that it was embarrassing for the latter would be an understatement.

Sheamus first went for a Brogue Kick, but Shorty G was successful in finding an escape. He then delivered a German Suplex and tried to pin Sheamus, but the latter prevailed. Sheamus then followed it with two consecutive Brogue Kicks to ensure a comfortable win for himself on SmackDown.

To put things into perspective, the time taken to write this slide was longer than the duration of this match. The only good thing that came out of this encounter was the fact that Sheamus looked ready to accept Big E’s challenge. The New Day Member proposed a Falls Count Anywhere bout and both Superstars will now lock horns on SmackDown next week with the stipulation (as mentioned above) governing their match.

Every time AJ Styles steps inside the ring, the expectations from him are always high. But tonight, the Phenomenal One is mentioned in this list because of the work he put up to establish Jey Uso as a credible threat on SmackDown. Both Superstars locked horns in a brilliant encounter to kickstart the show tonight.

Styles was at his best as a heel and did everything he could to provoke Jey Uso into attacking him. The latter looked extremely confident as he went after Styles without wasting a single second. It was evident that this SmackDown match was only booked to make Jey Uso look strong and it was great to see Styles go above and beyond to help the cause.

Their match on SmackDown also proved that both Superstars could lock horns in the future. Once Jey Uso’s ongoing title feud with Roman Reigns’ comes to an end, he can still enjoy his push as a singles Superstar. Moreover, we could also see him compete for the Intercontinental Championship in the coming months, thanks to a promising match against AJ Styles.

On this week’s episode of SmackDown, WWE Superstar John Morrison was easily defeated by Otis as the two continued their feud on the Blue brand. The former tag team champion could barely make room for any offense and was completely dominated by one half of The Heavy Machinery. The match portrayed Morrison as a very weak competitor inside the squared circle.

Their match started with Morrison immediately trying to attack Otis, but the latter ducked. Mr. Money in the Bank then went on to land a splash and then went on to deliver the Caterpillar that ultimately allowed him to pin Morrison in the middle of the ring. Tonight’s victory looked extremely easy for Otis, which makes you wonder why he hasn’t cashed-in his MITB contract yet.

As for John Morrison, he certainly deserves better treatment on SmackDown. We have seen him put up good matches this year. Given the current state of the tag team division in WWE, it makes me wonder if the company can afford such losses for those who frequently represent the same on SmackDown.

This name might seem unusual, given that Alexa Bliss didn’t compete in any match tonight. However, it was her appearance on the Kevin Owens show that ended up being one of the best segments on SmackDown this week. One can’t praise her enough for the manner in which she transitioned into ‘The Fiend’ Bray Wyatt’s ally and facilitated his arrival on the Blue brand this week.

During the KO show on SmackDown, the host asked her abo 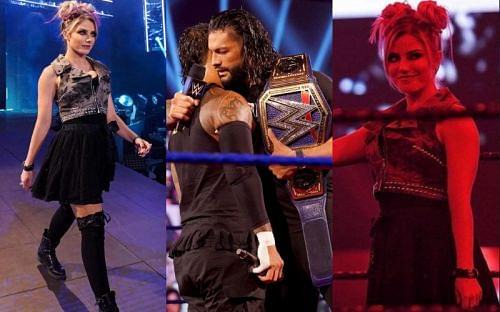 ut the recent changes in her character. Bliss justified those changes and even prompted Owens to embrace the good things that come with that kind of shift in their character. A concerned Owens was looking for The Fiend before the latter made his appearance and attacked Owens.

After that, both The Fiend and Bliss stared at each other before they held hands and announced their alliance in typical WWE fashion. Bliss looked great in the new role, and the segment also confirmed a match between Owens and The Fiend for next week’s SmackDown. It will be interesting to see what’s in store for all the Superstars involved.