Check Out The Top 5 Most Decorated Footballers

By Heisfrisky (self media writer) | 1 year ago 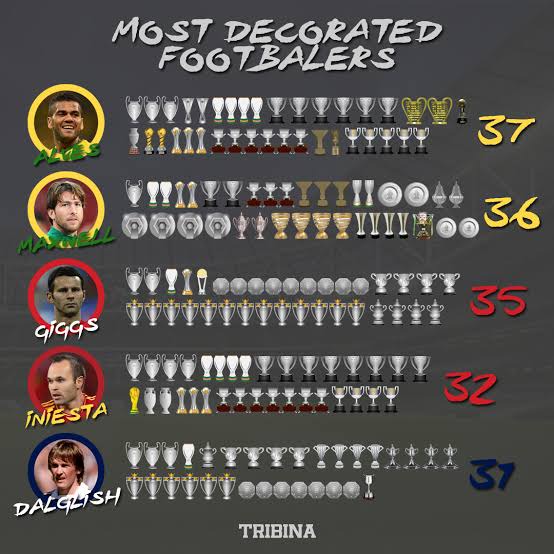 Alves is a Brazil professional footballer who won 43 trophies of his career, He also captaining Brazil over the victory in peru In the Copa American Final. He is 36 years old of age and he is the most decorated player in the history of the game.

Giggs is currently a welsh coach and he was a former player,He played this whole career for Manchester United,He is a left winger he started his career in Manchester City,but joined Manchester United in 1987,Ryan also has personal achievement as a player:He is the first footballer to win PFA Young Player of the year award for two consecutive times in(1992-1993) He also the first player to score in each of the 21 seasons.

He was a Brazilian former professional footballer he played for a french Ligue 1 Paris St Germain lastly a Left- back,When he was retiring as a footballer he won the most active footballer in Europe.He is currently working as an assistant sports director for Paris st Germain.

He was among the players who won two historical trebles for Barcelona in 2009 and 2015.He won 35 trophies which includes: Nine la Ligas and Four UEFA champions titles that makes him the most decorated footballer in Spanish football history.

He was a former football player and currently Scottish coach, During his career he made 302 appearance for celtic and 502 appearance for Liverpool.He won the Ballon D Or silver award in 1983.