Real Madrid Are King Of Spain For The 34th time 🏆

By Baffajomuhammad (self media writer) | 2 years ago 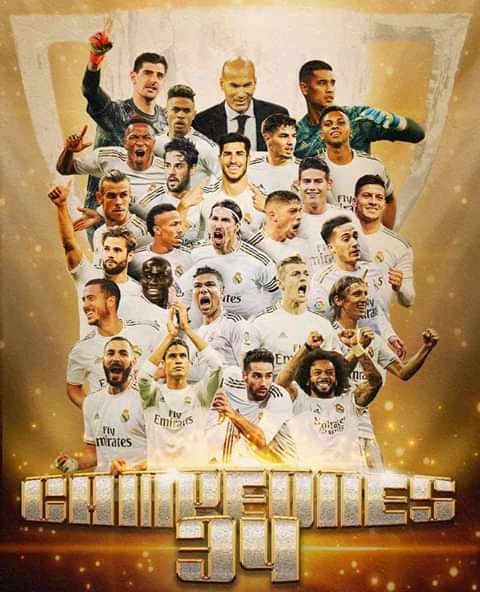 Karim Benzema scored a brace to power Real Madrid to a 2-1 victory over Villarreal, earning Los Blancos their 34th LaLiga Santander title on Thursday night at the Estadio Alfredo di Stefano in Madrid.

Benzema, who has been Los Blancos' most in-form player since the resumption of football, fittingly was the hero with a goal in each half to give Real their 10th win in 10 matches and their first domestic league title since 2016/17. 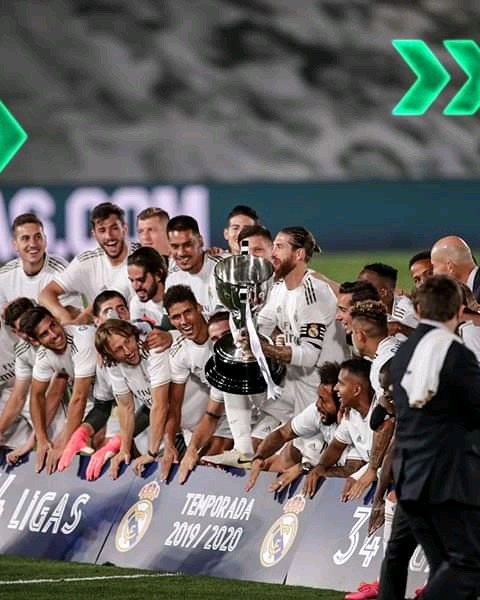 The big news from coach Zinedine Zidane's starting XI was the inclusion of Eden Hazard, while Rodrygo was also in the fold up top with Benzema. Otherwise, it was all the expected names and faces, with Luka Modric and Toni Kroos accompanying Casemiro in midfield.

There was very much a sense that Real would get things going early and a long-range rocket from Modric drew Villarreal goalkeeper Sergio Asenjo into his first big save of the night. The high pressure being exerted by Real was suffocating Villarreal and a costly mistake was just a question of time. It came right before the half-hour mark when Casemiro stepped to force a turnover, allowing Modric to break and find Benzema, who rifled in a shot from the side of the area for a 1-0 lead.

Los Blancos continued peppering the Villarreal goal with chances and Dani Carvajal was set to double the lead after an exquisite pass from Modric, but the Real full-back was denied by Asenjo.

Zidane turned to his bench in hopes of finding the second goal to sink the Yellow Submarine, summoning Marco Asensio and Vinicius for Hazard and Rodrygo, respectively.

Just when Villarreal with their second half introductions of Bruno Soriano and Santi Cazorla were starting to gain a foothold, Real would start to put the champagne on ice with their second of the night, albeit in rather bizarre fashion.

Ramos drew a penalty on the very edge of the Villarreal area, which was confirmed by VAR, but on the spot kick Ramos cheekily played a pass for Benzema to fire into goal.

The only problem was that Benzema had entered the area before Ramos had touched the ball, requiring a re-kick. Ramos then handed off penalty duties to the French striker, who hammered in his effort to make it 2-0

Villarreal never threw in the towel though and pulled a goal back with pinpoint service from Gerard Moreno for Vicente Iborra, who spun a header that beat Courtois and deflected in off the post to cut the Real advantage to 2-1.

In the end, just like in their previous fixture with Granada, Real would avoid any late heartbreak and erupted in celebration at the sound of the final whistle from referee Hernandez Hernandez, completing their domestic conquest.

Content created and supplied by: Baffajomuhammad (via Opera News )