Vickie Guerrero made her AEW return at Fight for the Fallen and was revealed to be Nyla Rose's manager.

Vickie Guerrero's music hit with the popular 'Excuse Me' catchphrase and the former WWE personality walked out to the ring with a mic in her hand. 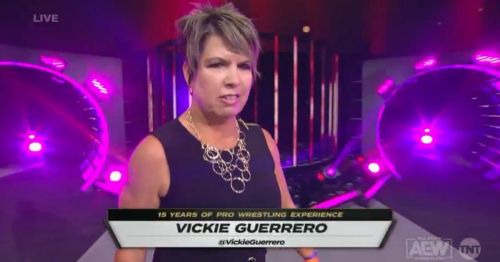 She cut a promo and put the entire AEW Women's division on notice. Vickie promised that Nyla Rose will once again become the AEW Women's Champion and ended the promo with a wicked laugh as her client stood behind her.

You can check out the photos and videos of the segment below:

Vickie Guerrero also reacted to her AEW return with the following tweet:

Vickie Guerrero first appeared as a guest commentator on an AEW Dark taping that was aired on YouTube in December last year.

She also appeared as the leading cheerleader during The Inner Circle's pep rally on AEW Dynamite following the Stadium Stampede Match at Double or Nothing.

Guerrero revealed during an episode of her Excuse Me podcast that the WWE had banned their Superstars from appearing on her podcast after they came to know about her AEW appearances. WWE has essentially cut their ties with Vickie, but the former WWE GM has no problems with it as she loves professional wrestling and is always open for work.

"I had asked to interview some Superstars for my podcast, and they had found out I went to AEW, and now they don't even talk to me. They didn't call me for two years; I hadn't heard from them. What did they expect me to do? Just to sit here and wait for them to call so I could do some work? I love wrestling. I love to work in the ring. And if someone is giving me an opportunity to go and show up and have some fun, then I should be able to because I'm not obligated to anybody." H/t  ComicBook

Vickie Guerrero now joins a long list of managers in AEW, and she should ideally do well with Nyla Rose. Vickie has a tremendous managerial track record, and that should prove beneficial in pushing Nyla Rose again up the card.

What do you think about the Vickie Guerrero-Nyla Rose pairing?