English Players With The Most Goals In The 21st Century; Rooney Tops, Lampard Is 3rd, Kane On 9th.

England has produced lots of great strikers in the 21st century with the majority of them playing in English clubs. The English men love playing in their country and some have created records for their clubs.

This article is about the English players with the most goals in the 21st century.

It is Manchester United's legend, Wayne Rooney that tops the list. The former Everton boy has scored 309 goals in England and is the highest English goalscorer in the 21st century.

The second in the list is Jamie Defoe who scored 269 goals in his career most of which are for Tottenham Hotspur.

Frank Lampard who is the current manager of Chelsea is the 3rd English player with the most goals scored. The Midfielder is known for his goalscoring exploits and is the highest goal scorer ever in Chelsea. He scored a total of 247 goals in England.

Sharp of Sheffield United is 4th with 242 goals while Lambert is next with 218 goals.

England national team captain, Harry Kane is on 9th. The Tottenham striker scored his 201st goal in his last match against Newcastle while Shawn Wright Philip is the 10th on the list. 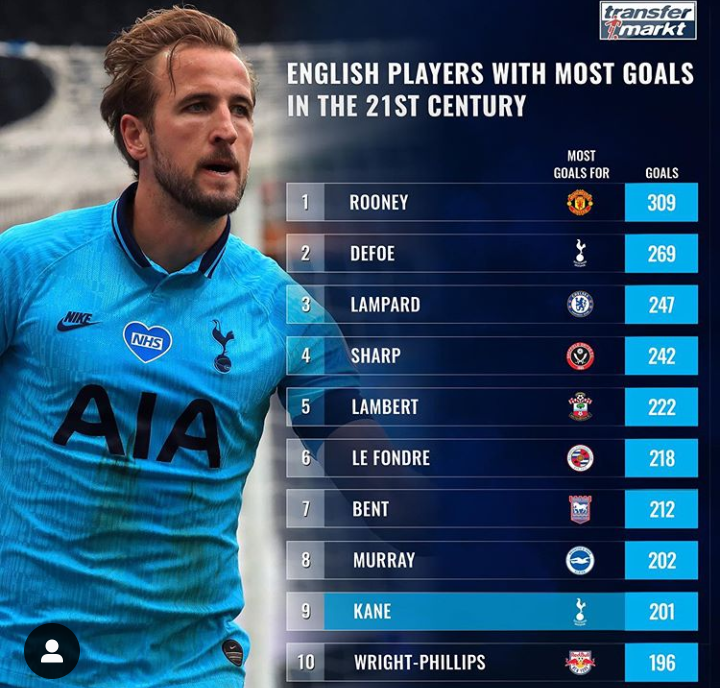